You are here: Home>Topics>Clubs & Organisations>Wivenhoe Town Cricket Club>250 Years of Cricket in Wivenhoe

250 Years of Cricket in Wivenhoe 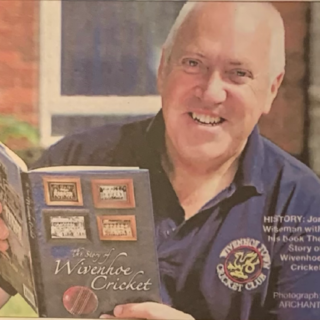 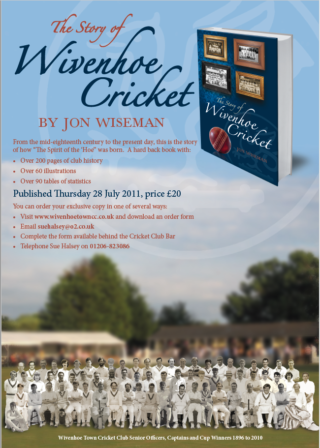 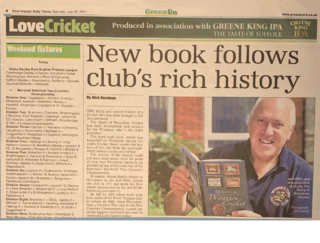 EADT article 30th July 2011 about the launch of the book written by Jon Wiseman: The story of Wivenhoe Cricket 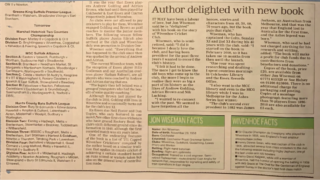 Part 2 of the EADT article 30th July 2011 about the launch of the book written by Jon Wiseman: The story of Wivenhoe Cricket 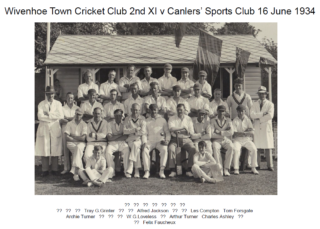 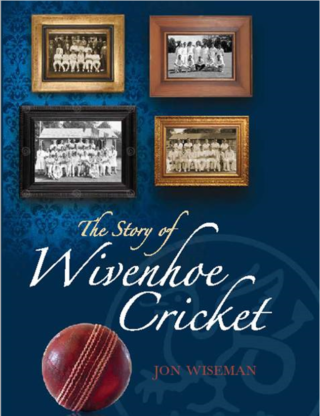 In February 2010, Jon Wiseman set about researching the history of Wivenhoe Town Crcket Club.  Thinking it might only take a few weeks, he soon discovered there was a lot of history to uncover, and it was not until 18 months later that the book was published.

This research involved talking to a large number of local people who have been involved either directly or indirectly with the Cricket Club, as well as lots of time spent in the Essex Record Office and other places including Lords Cricket Ground.  It even involved a visit to Melbourne, Australia, because of a connection with the Cricket Club there.

When he started this substantial and time-consuming project, Jon had been an active member of the Cricket Club for forty years. During that time he has captained the Colts, the Sunday XI and the 2nd XI. He became President of the Club in 2008 and was President when the book was published, and continued as President until 2017 when he eventually stepped down.  All profits from the book went to the Cricket Club.

The first evidence of cricket in Wivenhoe that Jon found was a match advertised in the Ipswich Journal on 22nd June 1765.  The game that was played that year was not quite the same as the game which evolved  from around 1800 and onwards.

It was from the beginning of the 1800s that the game of cricket became a regular feature of English villages and in the form which it is known today.

It is believed that Wivenhoe Cricket Club was founded in 1840

There is no hard evidence for this but it was around this time that cricket started to become popular. A match was definitely played in 1846 in the grounds of Wivenhoe Hall on land which we know today as the King George Playing Field and the report of which referred to the Cricket Club.  It later became generally accepted that the Club was established in 1840.

In 1856, Sir Claude William Champion de Crespigny (3rd Baronet) and his family had come to Wivenhoe Hall as tenants. Sir Claude was a keen supporter of cricket and it seems, through his support, Wivenhoe Cricket Club was given fresh impetus.  A match was recorded in 1858 that was played on the Mill Field, close to where the Club is today.  Later matches were played on land known as Ten Acres, owned by Wivenhoe Hall, before moving back later to playing on the Mill Field.

The Cricket Club in Rectory Road

From 1922, land owned by the Ministry of Health off Rectory Road  became used for cricket matches for some 14 years until, in 1936, the Ministry were persuaded to sell 4 acres to the Cricket Club for £100. Earlier, in 1932, the Ministry had allowed the Cricket Club to erect a clubhouse on this land. It has been home to them ever since and many great matches have been played there from that time.

The Story of Wivenhoe Cricket

The Story of Wivenhoe Cricket was written by Jon Wiseman in a 218 page book that was published in July 2011.  See note below. in that research he also checked batting and bowling records and compiled a list of over 1200 cricketers who had played cricket for the Club in organised matches up to 2010. Of those 1200, 271 were chosen to be awarded ‘capped’ status for their Club. To see more about some of these ‘capped’ players – click here.