A major project at the almshouses at Jonathan Feedham Court

The project was initiated in 2017 and completed early in 2020 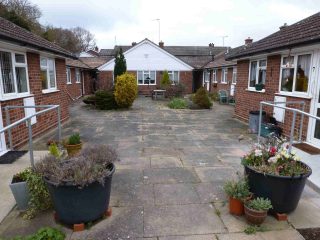 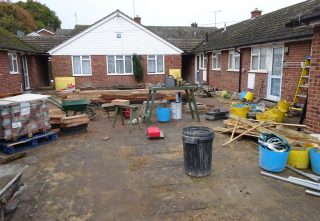 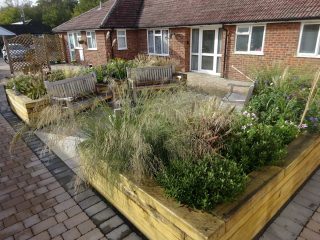 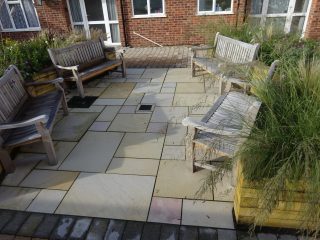 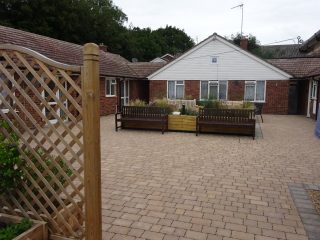 New block-paving in the courtyard
Photo by Peter Hill 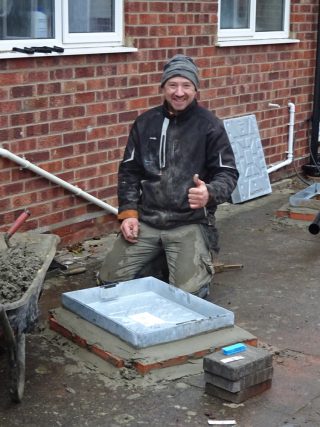 James Stimpson of JDS Building Services who did all of the work
Photo: Peter Hill 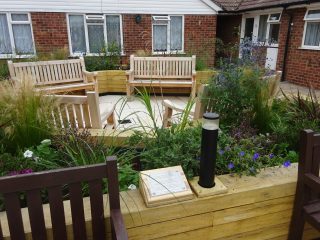 Plaque in the courtyard commemorating the names of Jonathan Feedham and Celia Hirst.
Photo by Peter Hill

This project to enhance the lives of residents at Jonathan Feedham Court Wivenhoe, was initiated in 2017. It first involved digging up the existing courtyard to lay new surface–water drains and around the outside of the 7 bungalows. At the same time, the trustees agreed ambitious plans to make the courtyard a much nicer space for the residents to spend time in, to socialise with each other and to promote health and wellbeing by taking a greater interest in plants and gardening. It did this by including: raised flower beds, 4 bench seats and screening to give greater privacy to the residents as well as plenty of safe, level space for the several residents who rely on walking aids when moving around. It was also decided to raise the level of the new courtyard paving to get rid of the unsightly access ramps and provide level access from the properties to the courtyard.

Work to transform the courtyard started in 2019

In 2019, work started on installing the raised beds and new block-paving to both change the atmosphere in the courtyard as well as raise the level of the courtyard to provide a level access to all 7 bungalows; 4 residents have mobility scooters and 4 can only walk with the use of walking aids.

The type of block-paving selected was especially chosen for its ability to provide a SuDS compliant self-draining system. This involved blocks with wider permeable joints, filled with fine gravel, and laid on a thick bed of permeable material to make the whole area self-draining.  This meant avoiding the need for numerous falls and gullies which would have made the whole area more difficult to negotiate for older people who could be unsteady on their feet.

Power sockets were incorporated in the raised beds so that things like twinkling lights on a Christmas tree at the appropriate time of the year are easily possible.  Existing timer-controlled courtyard lights means that the seating area can be enjoyed into the evenings as well.

A focal point in the courtyard

For the first-time, this new seating area provides a focal point to the courtyard, encouraging residents to come out and socialise outside.

The residents have been regularly having coffee together on sunny days during the summer. The courtyard faces south and so gets both sun and shade according to the time of day.

Generous space around the raised beds allows for electric buggies and walking frames.  The addition of 3 offset screening panels at the front of the courtyard adds to the privacy which the residents can now enjoy for the first time since the bungalows were built in 1974.

The plants that have been chosen for the raised beds had been especially selected to provide year-round interest.

Wellbeing of the residents is the aim

The Trustees involved the residents in the design of the new courtyard and the residents have taken responsibility for maintaining the flower beds after they were initially planted up.  We all believed improved access to the courtyard would enhance the lives of residents.

Pam Glover, one of our residents with an extreme physical handicap said:  “It is a pleasure now to go into the new courtyard garden.  The communal seating area, arranged as it is within a grouping of raised flower beds, gives a sense of seclusion and intimacy that encourages residents to gather together and chat.  This is great as a lot of us lead very restricted lives.  I certainly use the garden more often now than I used to.  And, yes, it has enhanced my life.  I’m sure my health has benefited to from being out in the open more regularly.  Just feeling the sun on your face makes you feel better.  That and being with nature (flowers and humming bees) is just so beneficial to the soul… well done indeed to those who helped create it.”

A huge investment by the Housing Trust

The cost of the landscaping works was around £31,000. This was in part financed by a legacy to the Trust from a local resident, Celia Hirst.  Her name is now recorded on a plaque together with that of the original benefactor which says:

Official opening was cancelled due to Covid

Sadly, the official opening and planned celebration of the new courtyard which was due to held in May 2020 had to be cancelled due to the Covid pandemic restrictions.

All the Trustees as well as the residents are very pleased with the way the entire project has turned out, exceeding all expectations. They were very complimentary about the quality of workmanship provided by Wivenhoe-based James Stimpson of JDS Building Services  who also took great care to ensure the residents weren’t too badly affected by all of the work going on around them.