You are here: Home>New contributions>About Jane Cole who died in 2020

A Memorial Service was held for her in St Mary's Church on Saturday 7th May, 2022 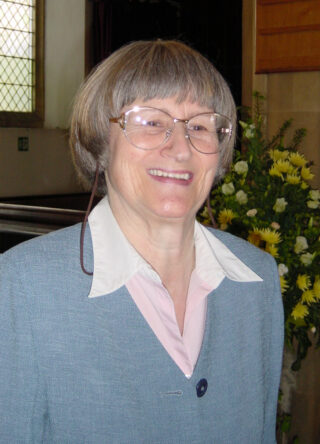 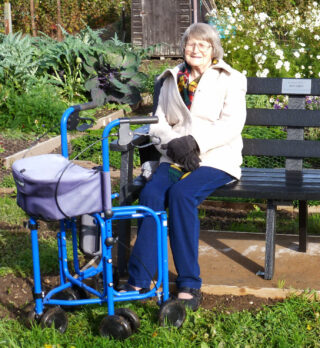 Jane Cole on Don's bench at the Wivenhoe Allotments which she organised on 25th October 2015 in memory of Don who passed away passed earlier in 2015 aged 87.
Photo by Peter Hill 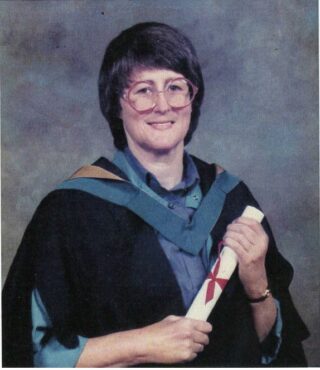 Jane Cole, photographed after receiving her Batchelor of Arts degree at the Open University in 1975.
Supplied by Janes brother, John Cole

Jane Cole Passed away peacefully at St Helena Hospice on May 4, 2020, aged 80 years. This event was not unexpected as she had not been well for a long time, Life had been getting more and more difficult for her with her rheumatoid arthritis and other medical issues which she put up without ever complaining.

Some years before she passed, she planned the arrangements for the service at her funeral.  In the event, because of the restrictions on funerals caused by the Covid pandemic, when only a very few people were allowed to attend, her brother arranged with the Rev Erwin Lammens, Rector of St Mary’s Church, Wivenhoe, to hold a Memorial Service in St Mary’s for Jane on Saturday 7th May, 2022. It was a lovely service and attended by so many of her brother’s large family, including 10 out his 12 grandchildren, the other 2 being unable to get to the Service.  Jane knew them all well, and they all knew her, visiting Wivenhoe often.

Jane asked me in 2017 if I would give a Eulogy for her when her time came, I was very honoured and flattered to be asked of course. I also realized that I needed some more details about her early life. I went round to see her and we enjoyed a ‘Michael Parkinson type interview’ reminiscing about the 40 years I have known her, and the organisations we have been in together, as well as exploring her time before Wivenhoe.

About the Life and Achievements of Jane Cole

She came to Wivenhoe because she had got herself a secretarial job at the University of Essex, where she became Secretary to the Finance Officer, Eric Wade.  She retired from the University because of ill-health in 1987.

She was born in Radlett, in Herts. She has a brother, John, who was 4 years older than her. She described her childhood as a happy one but at age 11 she found herself going to a private boarding school for girls on the north Norfolk coast, not far from Cromer, called Runton Hill School.

It was not a large school, with only just over 100 pupils but it gave her a good education.  She got on well, taking and passing lots of O Levels but somehow failed to get any A levels. However, the headmistress did make her Head Girl so she must have done something right. To be made Head Girl, was something of which she was very proud.

She did say to me that she is not at all ambitious. I guess in all the time I have known her, she hasn’t appeared ambitious but has always been a driven person, willing to spend hours working on something in which she believed. The word I would use to describe her overall is ‘Determined’.

She also described herself as really quite religious, particularly in her younger days. For example, even at the very young age of 10, going off to church from home, with a friend by themselves.

From Runton Hill School, in 1958, she enrolled herself in the Pitman’s College in Russell Square in London where she learned shorthand and achieved a speed 120 words per minute.  From there, she went straight out to the world of work; she chose to do temporary work in administrative and secretarial roles, and her shorthand skill certainly helped her in this process.

Life after school working in London

She seemed to thrive on short-term roles working mainly in London for a variety of firms which included:

– working for Vivien Leigh’s mother who had a beauty salon in Bond Street and where she met the famous actress Vivien Leigh.

– and for fashion designer and Biba-founder, Barbara Hulanicki, but before she really became famous; one of Jane’s tasks was to send out the first Daily Mirror dress!

Around 1964, she was sharing a flat in Emperor’s Gate, in Kensington, with two other girls.  On the floor above them lived John Lennon of Beatles fame. There were always girls hanging about outside the front door of their block of flats. I don’t think Jane was very impressed by their behaviour as it made getting into their flat very difficult, but she was amused when Jane’s flatmates gave the fans their cigarette ends saying they were John Lennon’s.

Then Scotland and Marbella until Wivenhoe in 1969

Jane was not afraid of hard work and got jobs fairly easily. This included 5 or 6 stints at the 50-roomed Grant Arms Hotel, in Spey, in Scotland; these days a prestigious hotel, but then privately run. She would be happy running the reception and doing other administration tasks.

She also worked in Marbella, in Spain, for a few months as a waitress; this was when she was diagnosed with the start of rheumatoid arthritis and she came back to the UK, and settled in Wivenhoe. This was 1969.

Bought a bungalow in Park Road and sudied for a degree

When this disease began to get worse in 1976, her Mother moved to Wivenhoe. It was then that they bought the bungalow at 47 Park Road. Sadly her Mother died not long after moving there, in 1977.

Jane studied for a Batchelor of Arts degree at the Open University in 1975 which she completed in 1985 after taking a break when her Mother died. I think she later regretted not going on to get her Masters. Jane began working for a Batchelor of Divinity degree at Suffolk College in Ipswich although found the writing of long essays alone in her bungalow very difficult and so didn’t complete the Degree.

She also tried doing a Reader’s Course but did not complete that either because she felt that she had nothing to say! She was perhaps a better listener and would determine the way forward based on what she heard.

Soon after coming to Wivenhoe, she got involved in life at St Mary’s and became one of several active figures in the Church for nearly 30 years until 2001 when she stopped going to Church.

She will be remembered particularly for having established the organisation Friends of St Mary’s in 1993; or FOSM as we affectionately know it, as an organisation to raise money for Church repairs. This organisation allowed people to support St Mary’s without necessarily being a member of it.  It has raised a substantial amount of money (£50,000) through various events and selling Wivenhoe Designs. I think we all have a tea-towel or two, a Wivenhoe mug or a calendar. She was very proud of FOSM and particularly of these Wivenhoe designs.

Of course, it was FOSM which began publishing Wivenhoe News in 1995 and that is now firmly established as Wivenhoe’s quarterly news magazine that regularly sells 700 copies each quarter and is run by an editorial board independent of FOSM. Jane is still held in considerable respect by that Board and is mentioned on its back cover, in the list of named people, as Editor Emeritus.

I really got to know Jane much better in 1987 when she roped me into being a performer in the Pageant, the story of St Mary’s from 1330 to 1987.  Jane persuaded 100 people to be involved in that production in various capacities. It was based on Olive Whaley’s little book, the Day Before Yesterday which describes Wivenhoe life and critical role played by St Mary’s throughout the ages. Having got this idea whilst still working at the University, a year later, through Jane’s determination and hard work, it eventually happened with 5 performances in June 1987.

I could go on about Jane’s achievement and involvement in Community life here in Wivenhoe. She had been on the Carnival Committee in its early days, and its Secretary for a while; Secretary to Wivenhoe Players, Treasurer to the Wivenhoe Society; Secretary and Chairman of the Wivenhoe Branch of ARC – Arthritis Research Council which I remember used to hold some wonderful fund-raising lunches; She helped Anne Horner to establish Open Gardens in 1987 by helping to write the programme. Open Gardens of course is still an important feature in the Wivenhoe Social calendar. And the other event which is a firm fixture here is Art on the Railings for which she was one of the founders in 1983.

She was Secretary of St Mary’s PCC for several years, member of the Deanery Synod, and used to organise the distribution of 1,000 Christmas Cards in Wivenhoe each year.

Along with others from Wivenhoe, she became a member of the Sea of Faith, a network of people who explore their religious faith in different ways. She said to me:  “I like religion as an art form, like being involved in a musical work or a painting or in the mystery of life but not as a vehicle for belief or faith. I stopped going to church in 2001. I had found my niche in the church in the late 1970s because there was so much to do!”

We will remember Jane for many reasons

We will remember Jane for always being cheerful despite the difficulties that rheumatoid arthritis caused her. She had both knees replaced and both hips in these last 20 years that this crippling disease took its toll on her.

Sadly she never wrote the book which she intended to do in retirement, but she had a great love of books, and her house was full of them.

It was in 2001 that Don Hirst, her next door neighbour for many years, sadly lost his wife, Rosalind, and he found it very difficult to be on his own.  He had a pulmonary embolism that year and needed looking after, so he moved in with Jane. His cat too quickly made its home at No. 47.

Jane said to me:  “I am very grateful to all the friends I have had in Wivenhoe, those who sat on FOSM committees, those who took over FOSM, Wivenhoe News and the Designs.

I came to settle down here and truly did.  I am also very grateful to Don’s family who have helped me when needed since Don died”

Jane, we were very fond of you too. We are all grateful for the contribution you made to Wivenhoe; you have left a great legacy and we thank you for it. We will remember you.