You are here: Home>New contributions>About the house called Chamberlains in the High Street

About the house called Chamberlains in the High Street

Once two cottages and named after Philip Chamberlain, a Master Bootmaker, who lived and worked from there 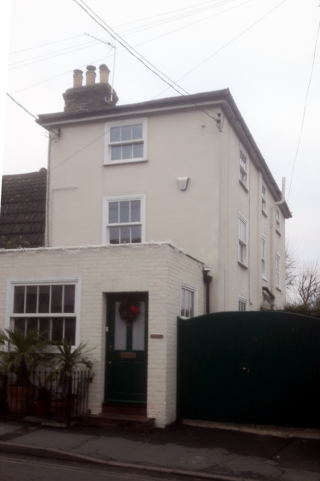 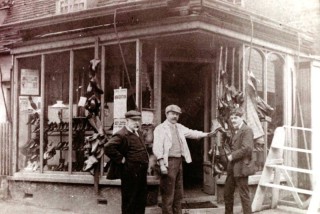 Moving to a new town during a lockdown is an interesting experience, especially when your lovely new house is actually very old and needs substantial heating, plumbing and electrical work which cannot be tackled until the worst of the winter and the pandemic is over.  We survived the last months of 2020 and started renovation work in the spring of 2021, work which is just coming to an end. Wivenhoe folk have been very friendly and welcoming – we were hailed on day two by a voice from the Post Office queue asking “Have you seen the ghost yet?” ‘Chamberlains’ at number 52 High Street may not be haunted in the traditional sense, but its secrets have been uncovered bit by bit as building work progressed: a boarded-up window, shared electrics and water with next door, plumbing with a mind of its own.  When we mention this to our new friends and neighbours, they simply respond that this is ‘Normal For Wivenhoe’.

I’ve always been keen on history and genealogy, so I wanted to find out more about ‘Chamberlains’.

CHAMBERLAINS – the house and the family

We had already downloaded the evocative picture of Philip Chamberlain’s bootmaker’s shop from the Wivenhoe’s History website and read the oral history from Etta Dan who lived here as a child.  But I wanted to dig further and both find out its more recent history, and go far enough back to find out how old the property is.

I can see from the 1799 tithe map that there is no property on this plot, but I believe the long thin shape of ‘Chamberlains’ can be made out on the 1863 map which shows the planned route of the Wivenhoe to Brightlingsea railway.  It is clearly there on the 1897 Ordnance Survey map, with a yard alongside, before the construction of the bank (now Wyvern Stores Post Office). Several outbuildings are shown – and we have uncovered a lot of bricks from old foundations in our back garden.  A view from the Church tower (which is estimated to be from 1938) shows the back of the house and the extensive outhouses, and shows a side door, which bears out the theory that it was two separate cottages at one time, one behind the other (which would also explain the lack of a number 54 High Street). There are few other old photographs which show the house – in views up and down the High Street it is set-back and hidden.

I turned to the 19th and 20th century censuses, but with no house numbers on the old records and often more than one household in a building, I have not found it easy to pinpoint the house through the centuries.  Even counting down from the Greyhound pub – one fixed point in the census records – did not help.  I need to do more research on the occupants of the neighbouring houses across those censuses to be more certain.  It was relatively easy to trace the Chamberlain family, though.

In 1848 George junior married Jane Emma Harden. In 1851 George and Jane (aged 25) and son Charles (3 weeks old) were living at the lower end of the High Street, together with his mother Elizabeth (aged 51) who was listed as a nurse.  George was 27 and was a shoemaker employing 5 men.

In 1861 George, Jane and sons George (12) and Philip aged 6, both at school, were living back in Bath Street and George was listed as Innkeeper and Bootmaker.  The inn was The Ship at Launch on the quayside (formerly called The Woolpack). It closed in 1910 and was demolished in 1916 to enable the road to be straightened for better access to the shipyard.

Philip married Henrietta Nicolle in Wivenhoe in 1890 and in 1891 they were living on the High Street, and his occupation was bootmaker. Also, further down the High Street was his brother Henry, aged 22, listed as Boot and Shoemaker, and Jane was living with this son.

In 1911 Philip was a 56-year-old Bootmaker living with Henrietta at the same address.  Arthur was now a boarder with the Sparling family at 17 Manor Road.

The electoral roll for Wivenhoe in 1909 and 1910 lists Philip Edgar Chamberlain living in the High Street at a property that was a dwelling house and shop.  The roll from 1920 to 1929 includes Philip and Henrietta, joined in 1923 by Etta Phylis Chamberlain.  Philip died on 26 February 1931 and left his possessions (valued at £364 6s 2d) to Henrietta his widow.  Henrietta was listed on the electoral roll at the 52 High Street address in 1931.

Philip dies in 1931 and the shop is taken over by younger brother, Arthur

In the national register of 1939, the shop in the High Street was occupied by Arthur Henry Chamberlain (b 9 Oct 1868) who was single and listed as Boot repairer Master.  Henrietta was living in Queens Road and Etta the daughter, by now married to Fred Dan, was living at 1 Ernest Road. Arthur Chamberlain died in early 1940 aged 71.

In 1971 the front of the building was changed.

In 1971 a planning application was made and permission granted to demolish the shop front: ‘Demolish existing shop and replace with smaller brick-built shop and increase ground-floor living accommodation’.

No details are shown of who made the application.

Chamberlains was purchased by Diane Spivey and her husband in 2020

We bought ‘Chamberlains’ from the family of Roger Howard, who had lived in Wivenhoe since 1986.  Roger Howard and his wife Ann were listed on the Electoral Register as resident at 52 High Street from 2002 to 2019. Roger was a playwright, academic and poet: a lecturer at Essex University from 1979 to 1993, he also lectured in China, and wrote about revolutionary Chinese theatre.  He was the founder of Theatre Underground at the University: a group of actors and technicians who came together to produce ‘outstanding new plays from Britain and abroad which explored the dilemmas of personal and social life, using new theatrical and dramatic forms’. It also hosted plays from radical touring companies such as 7:84, Joint Stock and Cheek by Jowl. His wife Ann Zemaitis Howard was an artist, who painted landscapes, and in the 1990s, she made a series of stained-glass panels under the tutorship of the glass-maker Ben Finn, using old glass. She presented her panel ‘Madonna and Child’ to St Mary’s Church in Wivenhoe shortly before she died in 2016. Philip died in 2019  – for more about Ann Zemaitis Howard and her picture ‘Madonna and Child’ – click here.

Where next for my house history?  I would love to hear from anyone who has memories of the shop and the cottages, to help me fill out the post-war years. Did you ever visit?  When did it stop being a shop?  Who lived here before Roger and Ann? I would also be interested in hearing from anyone who has undertaken similar histories of buildings in Wivenhoe, for advice on next steps and useful sources. Thanks in advance for your help.

There is a long way to go, but I am determined that ‘Chamberlains’ will not be known forever as ‘the house with the builder’s skip’!