You are here: Home>New contributions>About the Silver Queen bus service

About the Silver Queen bus service 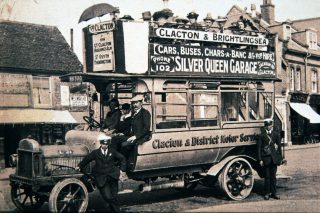 A typical Silver Queen bus from about 1920 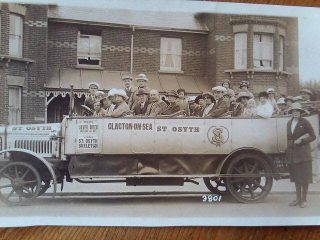 Clacton and District Motor Service Ltd, trading under the Silver Queen name, started the first motor bus service between Wivenhoe and Colchester in 1919.  The service ran from outside the Lamb Hotel, by the Hippodrome, in Colchester High Street to St Mary’s Church, where the bus turned round in the Falcon yard.

Silver Queen, centred on Clacton, had a network of bus services and charabanc excursions covering most of the Tendring area, but not west of Colchester. There was much competition with other bus operators such as the National Omnibus and Transport Company and Berry’s buses, particularly to Brightlingsea, although by agreement Wivenhoe was left to Silver Queen.

The buses would have been very similar to the one in the photograph, with open top and solid tyres.  Several of them were purchased by Silver Queen as military surplus after WWI, having previously been used in London before transporting troops in the war effort.  The chassis would then be overhauled and fitted with a new or refurbished bus or charabanc body by Silver Queen.  They were normally polished aluminium with green mudguards etc, although this was changed to reddish maroon and ivory in 1928.

My father recalled travelling from Wivenhoe to Colchester on the Silver Queen buses as a boy in the 1920s, still with these old open top buses with solid tyres.  Two or three passengers were allowed to sit on the bench seat beside the driver and he considered it a great treat to be allowed to sit there.  Apparently for years the return fare to Colchester was 6d for adults and half price for children.