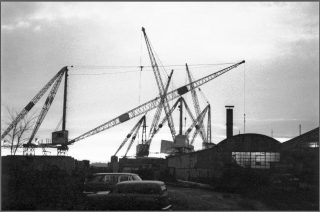 Over an 18-month period, a watching brief was carried out on groundworks for a residential development on the former shipyard and gasworks in Wivenhoe. It was possible that remains of medieval waterfront activity and post-medieval ship-building activity might be exposed. Timbers from the 19th-century shipyard were exposed but otherwise the site proved to have been extremely disturbed in modern times. Foundations to one of the gasworks buildings were exposed and there was also much contamination in the area of the gasworks.

This is the archive report on the archaeological watching brief carried out at the former Cooks shipyard and gasworks in Wivenhoe, located 6 km to the south-east of Colchester, on the tidal reach of the River Colne. Taylor Wimpey were granted planning permission to erect houses, flats, offices, and a fisherman’s store with WC and to refurbish the wet dock, jetty, slipway and waterfront (planning ref.: O/COL/01/1799) on the north-eastern bank of the river, accessed via Brook Street and St John’s Road (centred on National Grid Reference TM 040 214).

The watching brief was only carried out on a selected area of the development site, as defined by the written scheme of investigation (see section 2.4). This comprised the area to the north, east and west of the wet dock (parcels D, E and F respectively).

The work was carried out by the Colchester Archaeological Trust (CAT) between the 2nd March 2006 and the 16th November 2007.

The watching brief was commissioned by CgMs Consulting on behalf of Taylor Wimpey and the report was prepared by Kate Orr.

The aim of the fieldwork was to record and interpret any archaeological features or finds which were disturbed by the groundworks. Particular attention was paid to establishing the location and extent of any medieval waterfront activity and any post- medieval ship-building activity.

To view the 13 page report in full click on the link below:-