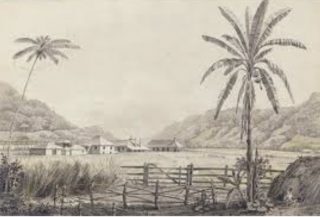 An impression of a Jamaican plantation
Jamaica Planters/Plantations Portal

This is a Codicil to the last will and testament of me George Reid of Sawley? in the County of Suffolk Esquire

I declare this to be a Codicil thereto

For further information about George Reid and the Friendship Estate and details of the crop (mainly sugar and rum) and number of enslaved people (reported as 224 in 1820) visit the UCL ‘Legacies of British Slave-Ownership’ at: