You are here: Home>New contributions>The life of Gibson Scofield who died in 1972 aged 77

Gibson Scofield was prominent member of the Wivenhoe community

By Peter Hill from a newspaper article in the Essex County Standard written by Mrs Y. E. Wright 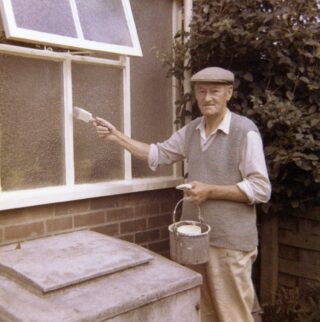 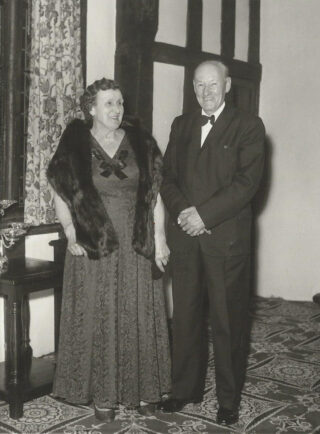 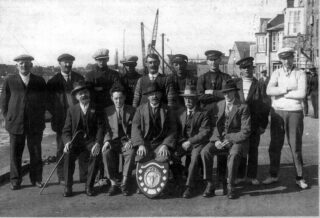 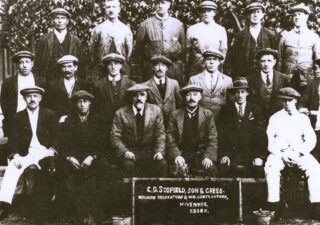 Charles and his son (Albert Gibson Scofield) are seated along-side each other behind the sign
Photo: Nick Sheen 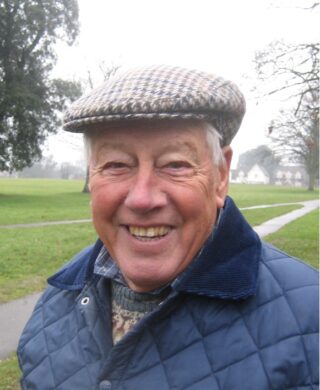 She told that Mr Scofield was a painter and decorator.  He was in business with his father before the war, but then became foreman painter in Wivenhoe Shipyard. During the last war he was an air raid warden. He later went to Rowhedge Shipyard where he remained until his retirement. Mr Scofield served with the Royal Naval Air Service in France during the 1914-18 war and was on the local committee for the peace celebrations. He was founder member and chairman for six years of the local British Legion.

She also said: He was captain of Wivenhoe Cricket Club in 1920 and of Elmstead Cricket Club in 1926. He was a past master and trustee of Colne Lodge Freemasons, a founder member and starting officer of Wivenhoe Sailing Club, vice-chairman of the Wivenhoe Horticultural Show up to the second world war, captain of Wivenhoe Bowls Club from 1938 and chairman for 30 years until 1970. He also served for four years prior to the last war on the Urban District Council.

Gibson’s wife, Grace Scofield, lived to 95 years of age. Grace had many friends through her membership of the Bowls Club, the Over-60s Club, the Women’s Institute, the Mothers’ Union and St Mary’s Church.  She was certainly very gregarious and a well-known and well-liked member of the community.

Her son, Charles Scofield, remembers when ladies were first admitted to the Wivenhoe Bowls Club:

‘My Mother was the first lady to be admitted to the Bowls Club, against some opposition from male members.  Before my Mother was a member of the Club, she made tea for the men using a Primus stove.  She later became the Lady’s President and Captain of the team.  The letter of acceptance from the Club Secretary, Mr Gilbert, confirming her membership is displayed in the club-house.  Ladies were at that time not permitted to use the club changing rooms and were not allowed to play on Saturdays.’