On Thursday 6th June 2019, the 75th anniversary of D-Day on 6th June 1944, was marked by a simple but poignant ceremony at the Wivenhoe War Memorial 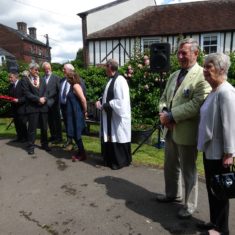 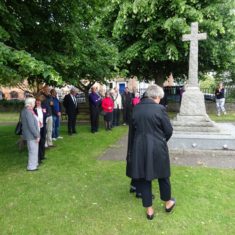 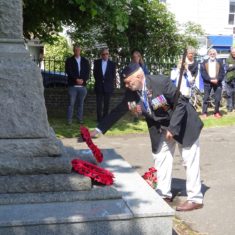 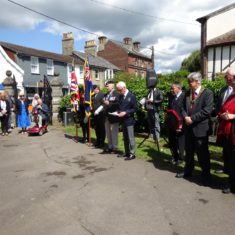 Lawrence Knox gave an opening address to the more than the 50 people who had come down to join this simple ceremony to mark this important day.
Photo by Peter Hill 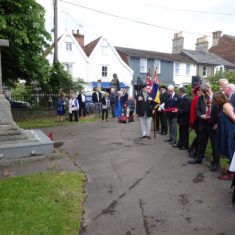 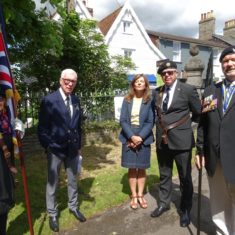 The ceremony was organised by the Wivenhoe Branch of the Royal British Legion.

After RBL Branch Chairman Bob Blackmore had called everyone to order, Lawrence Knox gave an address in which he recalled the extraordinary efforts of the 156,000 people who landed on the beaches of Normandy 75 years ago and all those who landed by parachute further in the fields of Normandy, and of the 7,000 vessels which took them across and all the aircraft which were involved on that first day and the 77 days which followed in Operation Overlord. This operation had taken over a year in planning. It was though the beginning of the end of the second World War.  It was at a huge cost though, with over 10,000 casualties on the first day including 2,500 who were killed. Overall over 22,400 allied servicemen died in Operation Overlord as well as large number of French people who were killed in the heavy fighting.

The Rev Erwin Lammens, Rector of St Mary’s led the prayers and, at the end of this simple service held at 11am on what turned out to be a bright sunny morning, spoke movingly of his own memories of the War growing up in Belgium and the eventual liberation of Europe in 1945.

Amongst the 50 members of the Legion and others who turned out were two Legion members from South Africa, Jerry and Jill, who were visiting their daughter who lives in Wivenhoe.