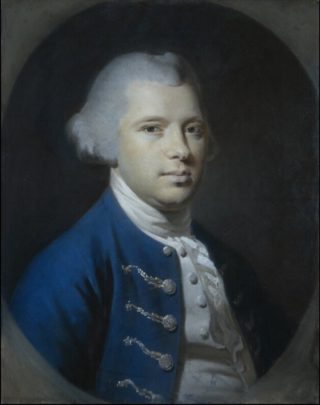 John Hall (1739-1797) was born in Wivenhoe on 21 December 1739. He was the son of a master mariner, William Hall and his wife Mary who owned a small 18 acre estate called Sayer’s Grove on Wivenhoe Heath.  While he was still young he left Wivenhoe, shortly after his father’s death in 1751, and became a pupil with William Wynne Ryland of the French immigrant engraver, Simon Francois Ravenet. He first found work at Sir Theodore Janssen’s Chelsea porcelain factory. In 1756 and 1761 he was awarded prizes for his work from the Society for the Encouragement of Arts, Manufactures and Commerce. In 1765 he became a fellow of the Society of Artists and was elected director in 1768.  He began to engrave Benjamin West’s historical paintings  such as ‘Penn’s Treaty with the Indians’ and the ‘Battle of the Boyne’ and in 1785 he was appointed history engraver to King George III. He also engraved some significant portraits including Joshua Reynold’s of Richard Brinsley Sheridan.

He died in Berwick Street, Soho on 7 April, 1797, from ‘a complication of disorders’ and was buried in St Mary’s Churchyard, Paddington.

This summary was sourced from: