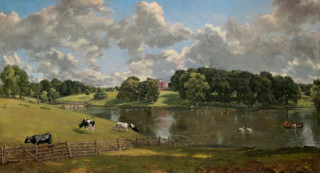 This booklet gives a detailed account of General Rebow (formerly Major Slater)’s commissioning of John Constable’s famous painting of Wivenhoe Park, now (at the time of writing) in the Widener collection at the National Gallery of Art in Washington. Rebow was more than a patron; Constable described him as ‘an old friend of my father’s’. There are brief details of Constable’s life and an outline of how he earned money prior to 1814 by painting portraits commissioned by friends and acquaintances. His portrait of Mary Rebow (whereabouts not known) seems to have taken about two weeks. After the Peninsular War, during which he was in command of the Household Brigade, General Rebow settled down in Wivenhoe Park. Constable returned to do various drawings including one of Wivenhoe Park on 27 July 1816 (Victoria and Albert Museum No 146) which comprises men fishing with a net in the lake. General Rebow was prepared to help Constable with his proposed marriage to Maria Bicknell and was willing to advance payment for a painting of Wivenhoe Park. Constable painted two small landscapes – ‘one in the park of the house and a beautiful wood and a peice (sic) of water, and another scene in a wood with a beautiful (sic) little fishing house, where the young Lady … goes occasionally to angle.’ He decides to do a larger picture as referred to above. He refers to the house being ‘full of dogs and some of them are very great beauties’. After his marriage he visited Wivenhoe Park again and made two pencil sketches. It is thought that the relationship continued for some time but eventually lapsed as Constable began to achieve fame. The booklet includes a colour reproduction of the Wivenhoe Park painting and some of Constable’s sketches of Wivenhoe Park made on 29 August 1817. Also an engraving of Wivenhoe Park of 1835. Full details of the Wivenhoe Park 1816 painting can be viewed at: