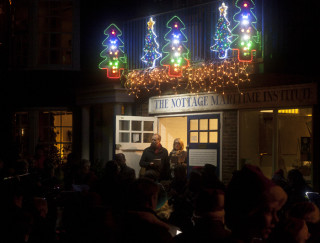 The 'band' outside The Nottage playing for Carols on the Quay - Dec 2015
Photo: Frances Belsham 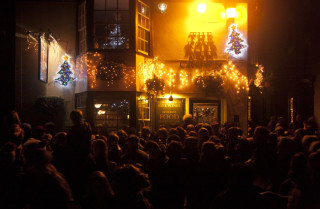 Crowds outside the Nottage and The Rose and Crown pub on The Quay for Carols on the Quay - Dec 2015
Photo: Frances Belsham 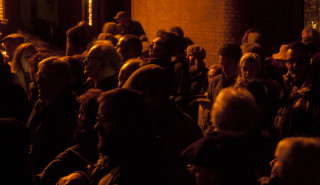 Crowds at Carols on the Quay - Dec 2015
Photo: Frances Belsham 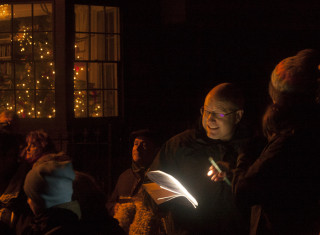 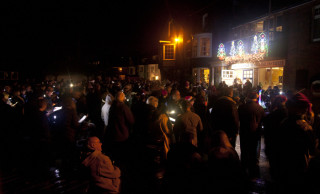 Carols on the Quay has become a regular feature of the Christmas calendar in Wivenhoe, when hundreds of people come down to The Quay to join a carol service led by the Rector of St Mary’s, Rev Erwin Lammens, Pastor Justin Lunniss of the Congregational Church, and Rev Alan Jenkins of the Wivenhoe Methodist Church.  The event this year was held on Sunday, 20th December 2015. The evening was far from the cold we, and the band, have experienced in some years although it was damp.

To accompany the carols, a band of around 12 volunteer musicians with their brass instruments led by St Mary’s Director of Music, Graham Wadley, gave a rich sound to the evening.

The crowd of possibly some 400 – 500 people joined in the carols with great enthusiasm, being helped by the considerable number of carol service sheets which had been supplied by the Churches. The Clergy led the proceedings from the balcony of the Nottage.

A bucket collection at the end of the evening raised £850 in aid of  CRISIS UK and half to FRRME (Canon Andrew White’s reconciliation work in Baghdad).

After the service, the landlord of the Rose & Crown pub once again generously provided several trays of mince pies for people to enjoy.

Recording:  Recordings of people singing these carols are available by clicking on this link:  https://soundcloud.com/colchchronic2  My favourite is the carol While Shepherds Watched their Flocks sung to the tune of ‘On Ilkla Moor Baht ‘at’ – see recording #5.