You are here: Home>Topics>Arts>Music>Mikado Limited 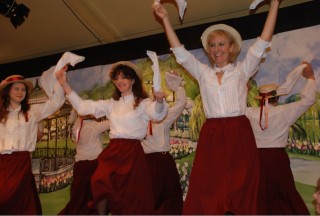 Zoe Mayhew and Jane Leydon and others as morris dancers 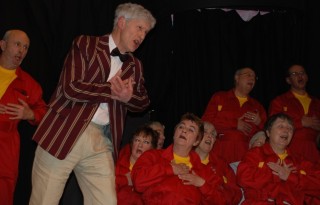 Robin Durance and the cast of the 'car factory' 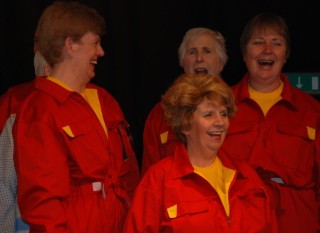 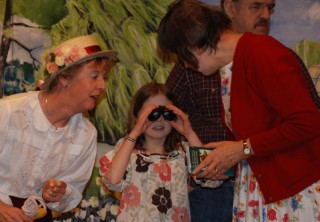 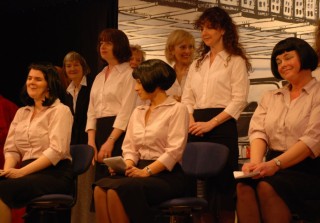 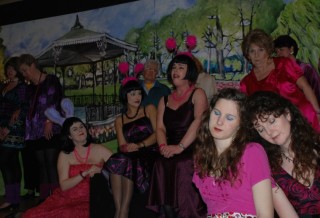 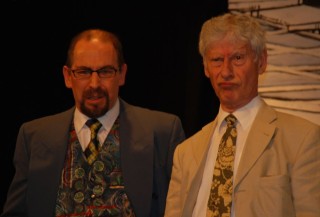 This was the third production by the Wivenhoe Gilbert & Sullivan Society’s of the Mikado. The first show was 1984 and the second in 1995. This version was directed by Mary Williamson and in updated, modern style. The set was modelled on a Japanese car factory!

The thing about the Wivenhoe Gilbert & Sullivan Society is that they are so good at putting on a show, whether the show is a G&S operetta or a non-G&S piece of musical theatre.  This time it has been G&S with a twist not The Mikado, but Mikado Ltd. which ran from 11 to 15 March.  Here is the action: as the audience settle into their seats they become aware that  Japan has come to North East Essex, the cherry blossom is on the trees, and the well known car manufacturers Mikado Ltd are in full production in a factory somewhere near here.  In the park a beautiful setting designed and painted by Jo Hunter – a brass band is manfully blaring away.  Grimethorpe Colliery Band it is not.  But in among that band is the Second Trombone, one Nanki-Poo (played by Tim Glover), the son of Mr O K Mikado, in disguise.  Mr Mikado, you understand, being the President of Mikado Ltd.  Do pay attention.  Very soon Nanki-Poo is singing A Wandering Minstrel I, ably abetted by the Chorus of Employees of Mikado Ltd, and then and then Mr John Wolton at piano takes up the accordion to play a jiggy country tune for the girls’ clog dance (wake up at the back there).

The scene changes: an amazing transformation into a car factory, enabled by Jo Hunter’s wonderful trompe l’oeil scenery, the production line stretching away and away to its vanishing point.  Jonathan Else is a convincing Pish-Tush, and Robin Durance is brilliantly sneering as Pooh-Bah (Lord High Everything Else).  The factory workers herald the appearance of Ko-Ko (Lord High Executioner and CEO of Mikado Ltd) with a great chorus of Behold the Lord High Executioner.  Martin Sparks as Ko-Ko is in excellent voice as he goes about his little list (which includes the Big Brother Finalist, the Lady Journalist and, bizarrely, the traffic lights at the top of Clingoe Hill) They’ll None of ’em be Missed.

Here come the factory girls, along with two tea ladies, a tea trolley, and a trio of delightful young secretaries Fiona Morris as Pitti-Sing, Emily Baker as Peep-Bo, and Natasha Shipp particularly charming as Yum-Yum who perch prettily on typist chairs for Three Little Maids.  The girls tease and torment Pooh-Bah, twirling him around on one of the chairs, Robin Durance here giving a passable imitation of a somewhat apoplectic Jonathan Miller.  The action rattles along to the finale of the first act and the assembled company whose “laughing song and merry dance” is interrupted by the melodramatic entry of Katisha “an older woman” most wonderfully realised by Hilary Brunning as a tight-jeaned stiletto-heeled redheaded femme fatale.  Silenced by the crowd, she vows revenge…

Act II opens hilariously, in the park, with bag lady Carolyn Smith having a kip, rudely awakened by sundry tipsy ladies out on the town.  Comes a high spot of the show, as Natasha Shipp sings, most beautifully and tenderly, The Sun, Whose Rays are all Ablaze.  On, to the formality of Mr O K Mikado’s entrance into the car plant Phil Stevens tall and imposing in morning suit and top hat.  With a cruel laugh he sings of how the punishment should fit the crime.

There is a convoluted conspiracy leading to Mr Mikado’s pronouncement of the penalty for compassing the death of the Heir Apparent at which the panic and despair of Ko-Ko, Pooh-Bah and Pitti-Sing are palpable.  The acting has in fact all along been impeccable, and the direction and choreography by Mary Williamson and Tim Glover, and musical direction by Hilary Brunning all highly professional.

The Flowers that Bloom in the Spring is prettily sung and danced; Katisha’s song Alone and yet Alive is another high spot.  On a Tree by a River a Little Tom-tit, charming and hilarious by turns, has the audience in fits of laughter; especially when the little bird plunges – or rather plummets – into the billowy wave on his final “titwillow”; concept Tim Glover, and cleverly done.  There is an untangling of the twisted plot, of course, and a rousing finale in song and dance For he’s Gone and Married Yum-Yum.

The company along with Peter Cook and the whole Production Team has worked hard to achieve this level of performance.  The Society deserves every plaudit that may come its way.