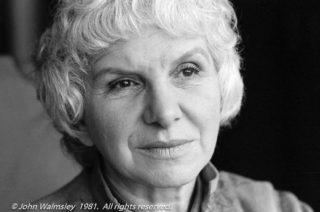 Leila Berg, the activist and children’s writer, was born as Leila Goller on 12 November 1917 into a Jewish family in Salford, Greater Manchester. Her father was a doctor (disappointed because his second child was not a boy) and she wrote vividly about her bleak early childhood in her autobiography, ‘Flickerbook’ (published by Granta, London,1997).

She was a bright child and won a scholarship to Manchester High School where she did well. But she turned down the opportunity to go to university, instead committing herself to working for the Young Communist League. She organised aid for the Spanish Civil War and two of her lovers died in the combat.

During the second world war, the heavily pregnant Leila, and her husband Harry Berg, who she married in 1940, had a narrow escape from death when their house at the foot of Parliament Hill, in north-west London, was bombed.

After the war, she began to write children’s books inspired by the work of Susan Isaacs (1885 – 1948) the child psychologist, who in 1933 became the first Head of the Child Development Department at the Institute of Education at the University of London, where she established an advanced course in child development for teachers of young children.

Leila cared deeply about the empowerment of children and as a writer, wanted to create children’s stories which moved away from the middle class style of ‘Janet and John’ readers and Enid Blyton’s work and showed ordinary children living ordinary lives: as exemplified in her ‘Little Pete Stories’ (1952). Some of her books also reflected her own childhood experiences such as ‘A Box for Benny’ (1958).

She was passionate about children having access to books and the state of children’s literature which at the time excluded the lives and experiences of working class and ethnic minority children.  She was appointed children’s books editor at Methuen from 1958 to 1960, and then editor of Salamander Books at Nelson, in 1965.

In 1968 she launched the groundbreaking ’Nippers’ series of early readers books (published by Macmillan). ‘Fish and Chips for Supper’ (1968) provoked outrage for its depiction of a family with a leaking roof and washing lines stretched across the stairs – some critics deemed such realism to be too devoid of optimism for young readers, others simply refused to accept that this was reality for any children in Britain. Later however, critics had to admit that the conditions described in the series did exist.

Leila was always interested in progressive education and had contact with many notable educationalists and this led her to write ‘Risinghill: Death of a Comprehensive’ (1969). She suggested that the controversial school’s very fame and success were threatening to the educational establishment. She also wrote the text for John Walmsley’s photographic book about the alternative Summerhill school in Suffolk, founded by AS Neill see: http://bit.ly/CRB_Summerhill1968_JohnWalmsley

In 1974 Leila received the Eleanor Farjeon award for distinguished services to children’s literature and in the same year, with the children grown-up and moved away, she and her husband separated and later divorced.

She decided to move out of London looking for ‘somewhere small, where you didn’t have to have a car before you could start walking‘ and re-established herself in ‘Alice’s Cottage’, in Wivenhoe, where she took an active part in local life, continuing to write and running a writing for pleasure group under the auspices of the University for the Third Age in her own home. She was also delighted to find that the Children’s Legal Centre (in whose creation she had been instrumental in its early days) was housed at the nearby University of Essex.

It was in Wivenhoe that she completed one of her final works ‘The God Stories’ – a book based on ancient legends and designed for reading aloud at any age. Her last book was her autobiography ‘Flickerbook’, covering the years 1917–1939, which was published before ‘The God Stories’ in 1997. This was so well received that it was unanimously made Book of the Month by Waterstones.

In 1999 she was awarded an Honorary Degree by the University of Essex, UK, in respect of her contribution to British life and scholarship. In her speech at the  honorary degree ceremony she said: ‘I drew up a list of criteria – what I would need in a place to be happy – and ended up with a short list, and finally, Wivenhoe.’  ‘Wivenhoe was not only for the fish shop, for the book shop, for the river and the fields, for the nearness to Ipswich film centre, and all the other things that were on that list of criteria. Perhaps it was because the Children’s Legal Centre was going to follow me and we would join up again, so that perhaps it could empower children again, as well as the caring adults.’

When later she was interviewed for ‘Sea-change: Wivenhoe Remembered’ the community oral history project she remarked that Wivenhoe was ‘quite extraordinary’ and an ‘incredibly friendly’ place.

Leila Berg died in Bury St Edmund’s hospital on 17 April 2012, leaving a son and a daughter. Her working papers and the only known and near-complete collection of her work for children are archived at https://sevenstories.org.uk while her papers and work for adults are archived at the Institute of Education at the University of London: see