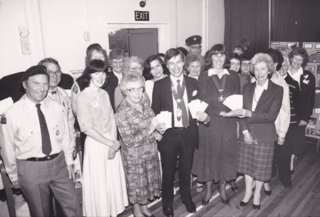 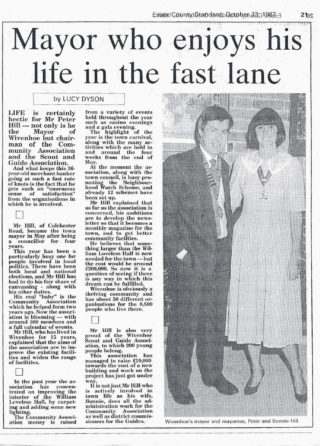 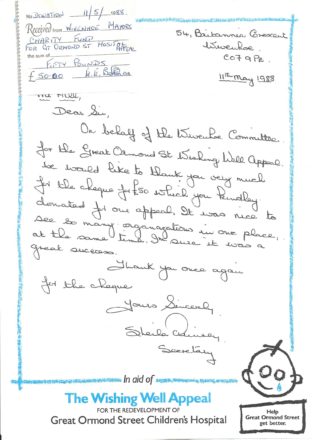 Letter of thanks from Sheila Quinney to Cllr Peter Hill, Wivenhoe Town Mayor, for the grant of £50 from the Wivenhoe Mayor's Charity Fund in 1988

In this my first time as Wivenhoe Town Mayor, in 1987 – 88, we organised lots of events during the year to raise money for the Mayor’s Charity Fund as well as help run fund-raising activities for other organisations with which we were involved as the Wivenhoe Scout & Guide Association and the Wivenhoe Community Association that also ran the Wivenhoe Carnival.

The Mayor’s Charity Fund raised £1,120 that year which was distributed at the Annual Meeting of Wivenhoe Town Council on Wednesday 18th April 1988.

This was the first time a Mayor had given out cheques from the Mayor’s Charity Fund in this way. It was a deliberate attempt to get many more people to the Annual Town Meeting of the Wivenhoe Town Council since previous audiences were usually less than 10 people. In that, it was very successful and has been adopted by successive Town Mayors since that time.

Having raised so much money during my mayoral year, Bonnie and I wanted to recognise the hard work of many different organisations operating in Wivenhoe at that time, including many which had never previously been recognised in this public way.  Judging by the many letters of appreciation which we received after the evening, it was a great success.

A total of 20 organisations benefited from the Mayor’s Charity Fund that year which included: