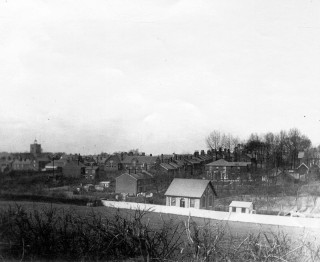 Land next to the Pump House
Wivenhoe Memories Collection

Circular dated 12th December from the Board of Agriculture and Fisheries re compulsory taking over of unoccupied land to increase food supplies. Committee to be appointed to carry out requirements of the order.

At a meeting of the Wivenhoe War Agricultural Committee, on Wednesday evening, Mr. A. Vinson was elected Chairman, and Mr. Henry Child, Vice-Chairman.

Mr. F. J. Byles (Acting Clerk to the Council) reported that the Committee had interviewed Mr. H. O. Rice, who had kindly let them have his field containing upwards of five acres, near the Pumping Station, Wivenhoe at an extremely low figure. This is to be cut up into 80 plots, and more than half of them have already been applied for. It was decided to plough half the land and charge 2s. for a plot of the ploughed land and 1s for the unploughed land.

The Committee recommended the Council not to take over the Cemetery land.

Sub-Committees were appointed to arrange for the ploughing and to purchase the necessary seeds, and it was intimated that the committee were quite prepared to supply seeds in reasonable quantities to other people in the district.

Re uncultivated land. Council to take over for the period of the war, a field adjoining the Council’s Pumping Station [on Queens Rd] belonging to Mr H. O. Rice at an annual inclusive rent of £5. Carried unanimously.

[After the War a news item appeared in the Chelmsford Chronicle on Friday, 17 December 1920 stating that ‘Wivenhoe Urban District Council referred the question of retaining the Queens Road allotment field to the War Agricultural Committee, the estate having changed hands and the new owner stating that he wanted the field for poultry farming and cultivation.’]