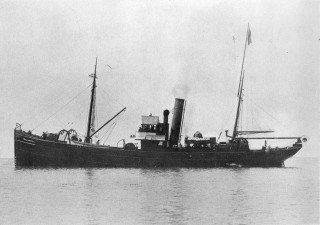 William Fall the first of sixteen minesweeping trawlers built for the Royal Navy in 1918 and1919.
Nottage Maritime Institute 02380..18 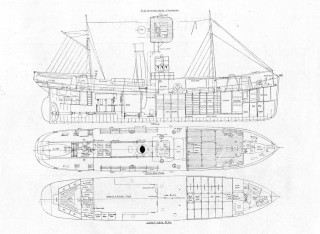 A drawing of the basic layout of the Straith class trawlers as built by Rennie Forrestts.
Nottage Maritime Institute 02380.19

William Fall  was the first of sixteen ‘Strath’ class trawlers built by Rennie Forrestt for the Admiralty.  The Wivenhoe yard was only one of many shipyards to build trawlers for the Admiralty, in all more than 450 were completed in UK shipyards.   They were named after men whose names were on the muster lists of H.M.S.s  Victory and Royal Sovereign at the Battle of Trafalgar.  Most were not completed until late in the war, or indeed, soon afterwards.

The Wivenhoe built ships were all sold off to commercial operators as fishing trawlers, as was intended when they were built; partly to defray some of the cost but largely to replace the many requisitioned and hired fishing vessels which had been lost or worn out on war service.  But first, there were a lot of mines that needed to be swept to make the seas safe again..

William Fall  was, like her sisters, 202 gross tons (79 net) and 123′ overall length.  Most of those built at Wivenhoe had engines made by A. G. Mumford of Colchester.

William Fall  was completed in June 1918 for the Royal Navy as yard number 1311 for use as a minesweeper and continued to sweep mines until 1920 when she was sold to the East Hull Steam Trawling Co and renamed Avondale H166.  She was sold again in 1934 to J. W. & J. W. Tomlinson of North Shields and scrapped in 1954.