In November 1914, an advertisement was placed in the national press inviting monetary contributions to a ‘Sailors & Soldiers Christmas Fund’ which had been created by Princess Mary, the seventeen year old daughter of King George V and Queen Mary. The purpose was to provide everyone wearing the King’s uniform and serving overseas on Christmas Day 1914 with a ‘gift from the nation’. 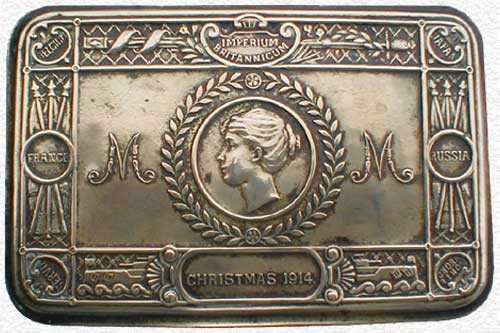 Example of the Christmas Gift from Princess Mary – Christmas 1914

The response was truly overwhelming, and it was decided to spend the money on an embossed brass box, based on a design by Messrs Adshead and Ramsey. The contents varied considerably; officers and men on active service afloat or at the front received a box containing a combination of pipe, lighter, 1 oz of tobacco and twenty cigarettes in distinctive yellow monogrammed wrappers. Non-smokers and boys received a bullet pencil and a packet of sweets instead. Indian troops often got sweets and spices, and nurses were treated to chocolate. Many of these items were despatched separately from the tins themselves, as once the standard issue of tobacco and cigarettes was placed in the tin there was little room for much else apart from the greeting card.

The ‘tin’ itself was approximately 5″ long by 3¼” wide by 1¼” deep with a double-skinned, hinged, lid. The surface of the lid depicts the head of Princess Mary in the centre, surrounded by a laurel wreath and flanked on either side by the ‘M’ monogram. At the top, a decorative cartouche contains the words ‘Imperium Britannicum’ with a sword and scabbard either side. On the lower edge, another cartouche contains the words ‘Christmas 1914’, which is flanked by the bows of battleships forging through a heavy sea. In the corners, small roundels house the names of the Allies: Belgium, Japan, Montenegro and Servia; France and Russia are at the edges, each superimposed on three furled flags or standards.

All boxes, irrespective of recipient, contained a Christmas card and a picture of the Princess. Those which were not distributed until after Christmas were sent out with a card wishing the recipient a ‘victorious new year’.  The wounded on leave or in hospital, nurses, and the widows or parents of those killed were also entitled to the gift. Prisoners of war at the time had theirs reserved until they were repatriated.

Great efforts were made to distribute the gifts in time for Christmas, and huge demands were made on an already stretched postal service. More than 355,000 were successfully delivered by the deadline. As time pressed on, a shortage of brass meant that many entitled personnel did not receive their gift until as late as the summer of 1916, and in January 1919 it was reported that ‘considerable’ numbers had still not been distributed.

Orders for brass strip were placed with the USA, who were not yet involved in the war, and a large consignment was lost with the ship ‘Lusitania’. As so much brass was being consumed in the production of weapons and munitions, the quality of the boxes which were manufactured late on was poor, being of a plated inferior alloy, when compared with the earlier pure brass examples.

When the fund finally closed in 1920, almost £200,000 had been donated for the provision of more than two and a half million boxes with contents.

Note: This text was taken from the website created by James M. Grant – www.kinnethmont.co.uk.