Madeline was born in Stowmarket, the daughter of a bank manager, in 1887. Her mother does not appear on the 1891 census. By 1901 aged 14 she was a boarder at a Private school in Cambridge, no doubt where she learnt French which stood her in good stead later in work in France.

The 1911 census confirms that Madeline was living at Ballast Quay Wivenhoe as the “secretary” to John Bawtree Hawkins. We may never be sure what brought her to Wivenhoe but we do know that John Hawkins was the Recruiting Office for the “War Service for Women and Girls Committee” in Colchester. Could this be the connection?

Within a year of the first meeting to establish a branch of the Red Cross Society in Wivenhoe Madeline, as Commandant, leads a 20 strong Wivenhoe Red Cross VAD Detachment at  the Territorial Parade in Colchester. June 1912.

Madeline was clearly brought to our village for a purpose.

Just 10 days later, 14 August 1914 we know that the Wivenhoe Red Cross Detachment has responded. Madeline has organised the detachment to equip and man a 13 bedded rest-station at the Infant and girls school.

The work of commandant was clearly not enough for Madeline, Helen Hawkins, was already in France by August 1914, Madeline followed in January 1915 according to an announcement in the Essex County Standard.

“RED CROSS LADY FOR THE FRONT”

“Miss M Dewhirst, Commandant of the Red Cross Detachment Wivenhoe has been given a position at the Front and proceeds there on Monday January 25.” 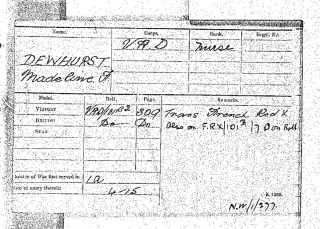 Medal Record National Archive not to be reproduced

Madeline’s British Medal card indicates that she arrived in France April 1914 working for the Trans French Red Cross. The medal roll for the French Red Cross does show a Madeline Dewhirst working as a nurse, untrained, at the French hospital at Arc-en-Barrois between April and October 1915.

It was for her work at this time in Theatre of War 1A The Western Front/France and Flanders that Madeline was awarded the Victory and British Medals.

The story of the founding of the hospital by four English sisters illustrates the attitude and determination of many upper and middle class women at that time who saw it as their duty to “get things done”.  In the autumn of 1914 the sisters heard alarming news from France of the French military’s catastrophic shortage of military hospital beds and trained nurses. Eager to supply their French ally with medical supplies and hospital staff, the Bromley-Martin sisters joined the early rush to offer humanitarian aid and skilled personnel. They devised a hospital plan, as family and friends gathered financial supporters, collected supplies, recruited hospital volunteers and secured a staff of trained nurses and surgeons. 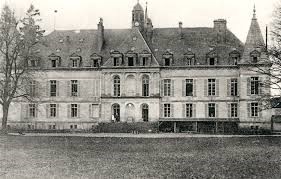 Founded in January 1915 under approval of the Anglo-French Hospital Committee of the British Red Cross Society, London, the hospital of 110 beds was conducted under military command of the French army’s Service de Santé.

Madeline arrived at this hospital in its founding stages. No doubt her organisational skills that we saw in action in Wivenhoe were soon put to good use.

Hospital personnel who worked there included a significant number of writers, poets, artists and illustrators. An illustrious crowd that in normal times Madeline would have been unlikely to have crossed paths with. These included:

Kathleen Scott, the Rodin-trained sculptress and widow of the Antarctic explorer Robert Falcon Scott, who organized and led the hospital’s small auto ambulance service in early 1915.

Henry Tonks, painter, Slade Art School Professor and trained physician was among the hospital’s founding staff who between January–April 1915 served as hospital anaesthetist and ward physician.

John Masefield, Britain’s future Poet Laureate, served a six week term as a volunteer orderly during the spring of 1915

Wounded and sick soldiers were attended in hospital by a staff of female trained nurses, a small contingent of surgeons and medical students and female auxiliary hospital staff provided by the British Red Cross (V.A.D.). 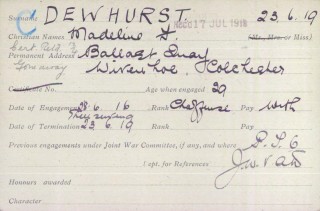 Red Cross Record Card. Not to be reproduced

It was not always easy to be accepted by the trained nurses. It is recorded that there was much resentment and sometimes bullying of the VADS by matrons who were not happy about untrained middle class ladies coming “to do their bit”. During 1916 unqualified nurses were replaced by qualified staff and many voluntary untrained staff returned home to work with convalescing wounded men. This also coincided at a time when there was an increasing need for soldiers at the front and men that had been formerly working in supporting roles such as Ambulance staff were conscripted. This appears to have been an opportunity for Madeline to remain in France.

Between June 1916 and September 1918 Madeline’s Red Cross record card indicates that she was working as a Chauffeuse in France which may or may not have been at the same hospital. 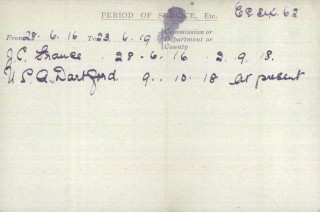 Red Cross Record Card reverse Not to be reproduced

It is likely that Madeline drove a motor ambulance during this period transporting soldiers that had been temporarily patched up at a field station within a few miles of the Front and sent by train to a Hospital. The nature of the battles meant that there would have been times of relative quiet followed by periods of complete madness when she would have been driving continually during day and night until the last of the men from the trains had been safely delivered. Nothing could have prepared Madeline for the horrors or the sights that she would have seen during her time in France.

Located sixty miles or more to the rear of the war’s entrenched front lines, the hospital received casualties from battles in the Argonne Forest and Champagne Offensive (1915), Verdun (1916) and the Meuse-Argonne Campaign (1918). Throughout the war wounded soldiers arrived in Haute-Marne via hospital train through a remote station located 11 miles from Arc-en-Barrois, and were transported to the château aboard Hôpital Temporaire’s small motor ambulance fleet. 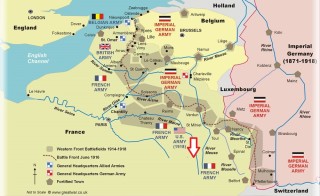 So why did Madeline not return home after the war? The likely reason was that she had no “home” to return to. Her father had died in 1914 and her brother had been in military employment since before 1911. John Hawkins had died of pneumonia in 1916 and Ballast Quay had been sold.

It seems that the war had changed Madeline’s life path irrevocably. In October 1918 her Red Cross Medal Card suggests that she is in Dartford, USA, still serving. Passenger lists show that she crossed back and forth to Canada until for the last time as far as we know remaining there in 1926. Her occupation?  A “rancher”!

Thanks to Heather Johnson and Sue Lightfoot (www.scarletfinders.co.uk) for all their help with additional research and interpreting the medal and Red Cross record cards