Taken to hospital, having been wounded on 26 March 1917 in the Egyptian fighting, and died later that day, aged 22.

Ian Valentine based on Research by John Stewart, Essex Regimental Museum and CWGC records, & news in ECS of 14 April 1917. 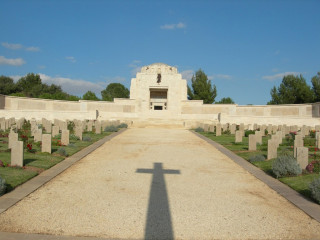 He became a Joiner’s Assistant in the Wivenhoe Shipyard.  He enlisted in the 1st/5th Essex Regiment, and suffered shrapnel wounds in the Dardanelles on 17 August 1915. He was treated in Nassich School Military Hospital, Cairo (letter in ECS 11 Sep 1915).

He was again taken to hospital having been wounded on 26 March 1917, in the Egyptian fighting, and died of his wounds later that day, aged 22.

He has no known grave.  Named on Panels 33-39 of the Jerusalem Memorial, and on the Wivenhoe War Memorial.