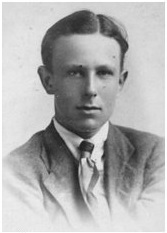 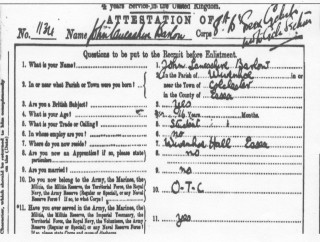 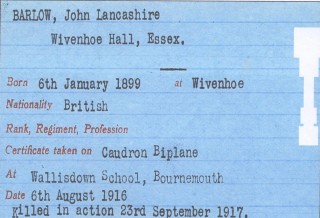 John Lancashire Barlow was born in 1899, second son of Alexander & Sophie Barlow of Wivenhoe Hall.  Known as ‘Mad Jack’.   Educated at Mr. Brown’s School, Eastbourne and at Shrewsbury School. He was very fond of shooting, and a good shot at an age when many boys are in the nursery.  On Aug. 4, 1914, the day war was declared, he joined the 8th Essex Cyclist Corps as a dispatch rider and served until December.  He was then only 15 years of age.

Being keenly interested in aviation and aeroplane engines, he wished to join the Flying Corps and set about qualifying himself for it.  He took his pilot’s certificate at the Bournemouth aviation school.  Being still too young to join up he then joined Wells Aviation Factory at Chelsea.  On reaching the age of 18 he received his papers for the R.F.C. Cadet Corps. and passing through that was commissioned in the R.F.C. His military training in flying was very rapid, just a month, to qualify for his wings on April 24 1916, and was at once sent to the front, where he has since been serving as a scout flyer, taking part in the battle of Messines and many other fights, making a very good toll of enemy machines  He came home on 14 days leave and rejoined about three weeks ago.

From the Essex County Standard, 29th September 1917:   News reached Wivenhoe on Thursday last of the sad death in France of Second-Lieut. John L. Barlow (Jack).  Deceased was a most promising young officer.  At the time of his death he was acting as Flight Commander of 40th Squadron, R.F.C.  Killed in action 23 September 1917, aged 18.  He is buried in Bruay Communal Cemetery, Grave K 28.  and named on Wivenhoe’s War Memorial.

Essex County Standard 6/10/17: The C.O. of the squadron to which Sec.-Lieut. Barlow belonged writes to Mr. Barlow that his son was a brilliant pilot, who had done much damage to the enemy in several fights and that he was “loved by the officers and adored by the men.”  Brigadier-General Shephard writes: “I knew your son since he joined 40 squadron, which is in my Brigade, and wish to say that no loss experienced this summer has been more regretted than that of your son.  He was so gallant and cheerful that his example will always be remembered by those that knew him.”    Another letter received from the Squadron states; “It is one of the greatest blows the Squadron, both officers and men, have sustained, for we all loved him for his brightness, courage and his fearlessness.  He died doing his duty gallantly and fearlessly as he always did.”  Sec.-Lieut. Barlow was killed instantaneously, falling within the English lines, and was laid to rest in the British cemetery by the Padre, who had loved and admired him from the moment he joined the Squadron.

Essex County Standard 20/10/17  AN APPRECIATION.  Mr. A.F. Barlow has received a letter from A/M. [Air Marshall?] W. Carter, R.F.C., detailing particulars of his son’s death.  He was fighting with six Hun machines and they forced him into a spinning nose-dive.  He was shot through the head and death must have been instantaneous.  He fell about 300 yards from the enemy lines, and with great difficulty his body was brought away at 3 o’clock in the morning by a party who went over the top at that hour to accomplish the exploit.  He was buried with full military honours at Marles Mines.  A/M. Carter speaks in glowing terms of the extraordinary courage and gallantry of the late Mr. Barlow.  “He was one of our best pilots,” he says, “and more than once I have told him not to do too many of his tricks, as he put the wind up me (an expression we use).”