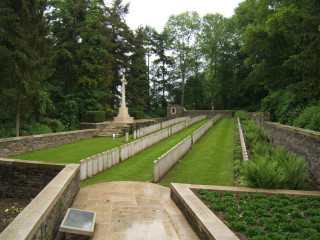 Charles Arthur Stanley Miller was born in 1895 in Colchester, the son of Samuel Miller, a Carman & Alice (nee Webber);  he was the eldest of four sons and although his birth and marriage certificate would record his name in full he appears to have generally gone by his last forename, that is, Stanley.

Stanley is listed on the 1901 Census living with his maternal grandparents at Tendring and then in 1911 back with his parents at 47 Artillery Street, Colchester where, at the age of 16, his occupation is given as Assistant Grocer. Stanley married Ethel May Canham in 1916 at Colchester.

Lance Corporal 39297 Stanley Miller was killed in action on 16 September 1918 whilst serving with the 11th Battalion Essex Regiment and is buried at Trefcon British Cemetery, Caulaincourt, Ainse, France. Samuel had previously served with the Royal Army Ordnance Corps (service no. 013476) and was commemorated on the Colchester Town Hall and St Mary Magdalen Church War Memorials, although the latter has since been demolished

The fact that there is a Samuel Miller whose name is recorded on the Wivenhoe War Memorial has having been killed in WW1 has confused the research into Stanley Miller who is a completely different person.  There is no evidence to suggest that Ethel was resident in Wivenhoe prior to her second marriage and none to suggest that Stanley was ever resident here and the fact that he was commemorated in Colchester would suggest otherwise.   Ethel is listed with her second husband on the 1939 Register, living on Rectory Road.  Although her second husband died in 1948 at Rectory Road, Ethel’s date of death remains unclear.