The report which appeared in the Essex County Standard confirming the death of Private Tom Weavers. 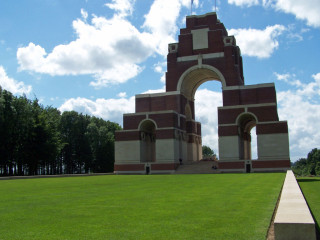 † 40114 Private Thomas James Weavers was born about 1890, the eldest of 4 sons of James (described as a General Labourer, Shipbuilding) & Ann Weavers, of The Folley, Wivenhoe.  Tom too became a Shipyard labourer.

He enlisted in 1914 in the 2nd Bn Essex Regiment.  He went to France in September 1916, but was posted as wounded and missing on 23 October 1916, during the Battle of the Somme, then confirmed Killed in Action in France the same day. He was aged 26.

The parents received a message of sympathy from the King and Queen.  A letter from the deceased’s chum says that he was loved by all the Regiment and that he died a brave hero, his end being glorious.

He has no known grave, but is named on Pier & Face 10D of Thiepval Memorial, Somme, and on Wivenhoe War Memorial.  The Essex County Standard of 26th October 1918 printed the following ‘In Memoriam’ for him: “WEAVERS—In loving memory of our dear Tom, who was killed in France Oct. 23,1916.

Do not ask if we miss him,

Oh there’s such a vacant place;

Can we e‘er forget his footsteps

Or his faithful loving face.

From his sorrowing mother and family — Mrs. Weavers, Wivenhoe.