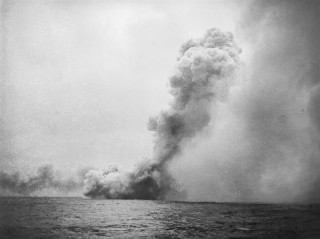 The final moment of H.M.S. Queen Mary at the Battle of Jutland.
IWM Photo from their WWI commemorative collection

Robert Edward Bell of Wivenhoe was serving as an Able Seaman in the battlecruiser H.M.S. Queen Mary.  He died on 31st May 1916 in the Battle of Jutland when the ship was hit by shells from the German Fleet and blew up.  His body, like those of most of his shipmates, was not recovered for burial.  Named on Wivenhoe War Memorial.

H.M.S. Queen Mary was a ‘Lion‘ class ship, and was one of three battle cruisers sunk during the Battle of Jutland.  She was built in 1912 and armed with eight 13·5 inch and  sixteen 4 inch guns, she could steam at 28 knots.

The design philosophy of the battle cruisers was that they could catch any other warship and had guns powerful enough to destroy any other vessel, but they were fast enough to escape from a battleship.  The speed was achieved by reducing the armour to match the guns of a large cruiser, but was not strong enough to resist a battleship.  The whole philosophy was flawed because officers in the Royal Navy were not trained to flee from opposing ships regardless of risk.

Unfortunately we do not have a photograph of Robert Bell.