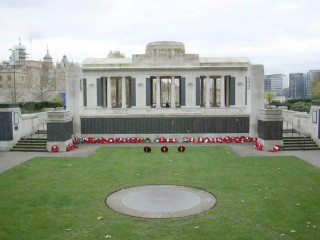 The P&O Liner S.S. Mongolia built at Greenock in 1903 and sunk off the coast of India in 1917 after hitting a mine.
Picture courtesy of State Library of Victoria

He served in the Mercantile Marine as an Assistant Engineer on the P&O liner S.S. Mongolia (built in Greenock).  He died on 23rd June 1917, aged  23, when the S.S. Mongolia hit a mine 50 miles off the coast near Bombay. Three passengers, three engineer officers and 14 native crew and three Europeans were killed by the explosion. The survivors were taken off without further loss, but it was not possible to get at the mails which went down with the vessel.

Assistant Engineer Frank Linwood is named on the Tower Hill Memorial, in London, which commemorates the men of the Merchant Navy and Fishing Fleets who have no grave but the sea.

He was not named on the Wivenhoe War Memorial.

Sources:  With Thanks to Wreck Sites: https://www.wrecksite.eu/imgBrowser.aspx?20099