Researched and compiled by Mary Norris 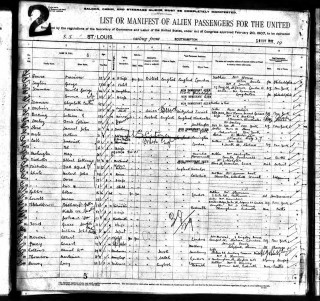 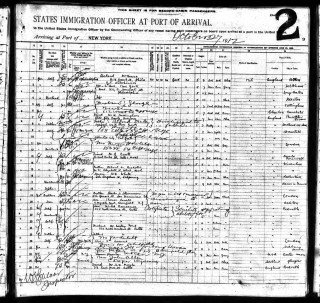 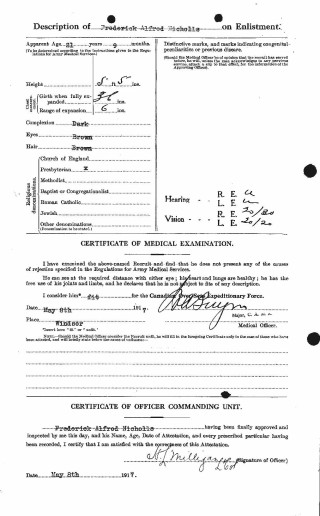 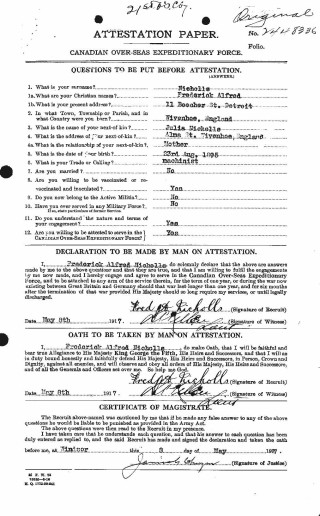 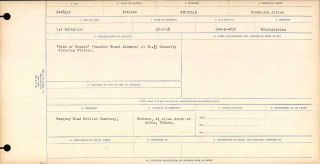 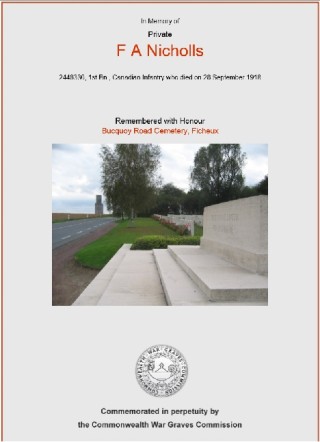 Frederick was born in Wivenhoe on 23th August 1895 to Joseph and Julia Nicholls. Joseph, a Wivenhoe native born in 1846, is variously described on the 1891, 1901 and 1911 censuses as shipyard labourer, sawyer and market gardener respectively. Frederick was the youngest child still listed at home in 1911 and one of 14 children born to the couple of whom 12 were still alive by 1911. The family lived in one of the tiny houses in Alma Street.

On 19th October 1912 he left Southampton on board the St Louis, an American Line vessel, bound for New York. I think it shows some strength of character to travel to America in this way from the same port the Titanic left from just 6 months before. It would have been fresh in his mind as Wivenhoe was quick to make a collection for the widows and orphans.

Frederick was accompanied by his elder brother Albert who had emigrated to Canada a few years before. They arrived at Ellis Island on 27th October 1912 and went through the standard immigration checks. From New York they travelled to Detroit where Albert lived. Frederick listed himself as a ‘platers helper’ and Albert as a machinist.

On 8th May 1917 Frederick volunteered with the Canadian Overseas Expeditionary Force in Windsor, a suburb of Detroit, and completed the two sided form for volunteers. Quite a large number of volunteers to the COEF were in fact British. By now he classed himself as a machinist and he gave his mother in Alma Street as his next of kin. After all the usual checks he was passed fit and given the number 2448336.

A period of training followed and he was transferred to the 1st Battalion Ontario Regiment and embarked for the front. By mid 1917 he found himself in France where the force was involved in the battles at Passchendale, Amiens and Cambrai. He may also have been part of the Battle for Hill 70 which saw the first use of mustard gas against Canadian soldiers.

He received a gunshot wound to the abdomen in the battle for Arras in September 1918 and was transferred to the 33rd casualty clearing station on the outskirts of Arras where he died of his wound on 28th September 1918.

He is buried in the Bucqouy Road cemetery at Ficheaux, just south of Arras, along with 81 other Canadian infantrymen who died the same day. In fact just under half the graves in this cemetery are for Canadian soldiers. His grave is in Section II, row H, number 36.