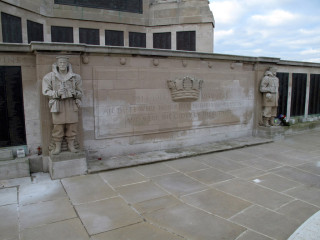 J.15280 Petty Officer Robert Edward Bell R.N. was born in 1895, the son of John Osborne (Fireman on private yacht) & Mary Jane Bell of Spring Cottage, Anglesea Road.  In civilian life he was an Assistant Butcher.  He joined the Royal Navy at Portsmouth as an Able Seaman, being listed by Essex County Standard on 24 October 1914 as one of those who had joined up.  He was “killed or died as direct result of enemy action” aboard H.M.S. Queen Mary sunk at the Battle of Jutland 31 May 1916     after being hit by a German shell.  His body was not recovered for burial.  Listed on Portsmouth Naval Memorial Panel  A-F, and named on the Board listing those Lost at Sea 1914-1918 in the Congregational church.