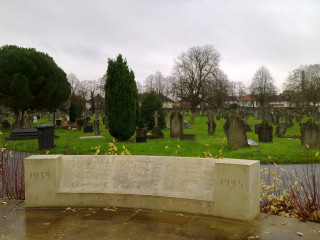 Petty Officer Arthur John Pitt, jnr.  J.383 R.N. was born on 26th May 1892, the son of Arthur John (Mariner) & Margaret Pitt at 4, Colne Terrace, Wivenhoe.   He worked in a local shipyard, but his Attestation Paper says he was ‘Steward (Yacht)’.  He married E.L. Pitt of 5, Sudlow Road, Wandsworth, London.

He enlisted as a boy on 15th February 1908, and signed on on 26th May 1910 for 12 years, when he became an Ordinary Seaman.  He served on H.M.S. Africa, Pembroke, Implacable, Actaeon, Apollo, Bonaventure and others.  He was promoted Able Seaman 13th September 1912 & Leading Seaman on 1st May 1917.  The Essex County Standard of 2nd February 1918 reported that “on Jan. 2  Mrs. A. Pitt, of Colne Terrace, Wivenhoe, received a telegram, stating that her son, Arthur John Pitt, leading seaman, had lost his life by the sinking of H.M.S. Raglan in action in the Eastern Mediterranean on Jan. 20. On Thursday last Mrs. Pitt received a letter from the Admiralty, stating that when the Raglan was sunk her son was saved, and that an error had been made.”

In fact he had been Wounded in Action on 20 January 1918.  The news was joyfully received in Wivenhoe, Mr. and Mrs. Pitt having early in the war lost a son in the country’s service.  However, he appears on the Congregational Church Board of those’ Lost at Sea 1914-1918′, although Notes by J. Jefferies and The National Archives record of ‘Deaths at Sea 1781-1968’ (ADM 242, Box 9) state he died on 16th December 1918, aged 26, discharged as dead from HMS Pembroke on 16 Dec 1918.  However his Navy Record Card says he was accidentally killed in Civil Employment.

He was buried at Streatham Cemetery, Tooting Plot D, Grave 290.  He is named on the Wivenhoe War Memorial.

John Collins says HMS Raglan, was a monitor, a shore bombardment ship, with two 14inch guns.  She had been in the Dardenelles since July 1915 soon after the first landings.  The four monitors remained in the area to annoy the Turks, support operations in Palestine and the Aegean, and blockade the Turkish out of the Mediterranean.  She was sunk by the Turkish (ex- German) ships Yavuz Sultan Selim and Midilli, the former Goeben and Breslau, on 20 January 1918.  And HMS Pembroke was the nominal base ship for Chatham Dockyard, i.e. a stone frigate, so was he transferred to another ship?  Very likely.