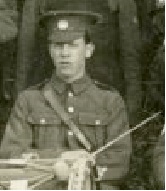 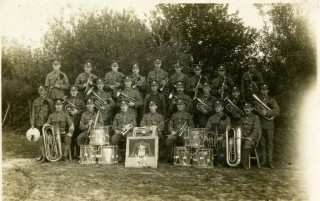 The photograph of the Band taken at Codford St.Mary, Wilts, whilst the 10th Essex Regiment was undergoing training with the 18th (Eastern) Division prior to going to France in July 1915. Horace Pitt is in the centre of the front row.
Photograph from the Essex Regimental Museum archives

The Essex Band in 1916. This picture was taken outside a cottage in Lamotte-Buleux a tiny village in the Somme département in Picardie in northern France at Christmas 1916.
Photograph from the Essex Regimental Museum 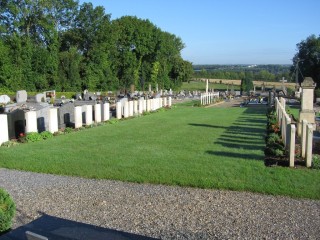 Boves East Communal Cemetery at the Somme where Sgt Horace Pitt is buried.
From the CWGC web site

16595 Horace William Pitt was a Wivenhoe man, who went to war with a band and ultimately became known as The Bandmaster!

Horace William Pitt was born in Wivenhoe on June 2nd 1895, the son of William and Edith M. Pitt of Alma Street and later Hamilton Villa, Hamilton Road, Wivenhoe.  William’s Father was chief cook on board H.M.Y Rosabelle on patrol service in the North Sea. Horace worked as a shipwright; was a valued trombone player in the Wesleyan Guild Band and Congregational Church; and was also a Sunday School teacher and active member of the C.E.

He was a popular lad and was almost the first to join up in the town. answering the call to arms by enlisting on 3rd September 1914 at Colchester along with other members of the Wivenhoe Town Band (recruited, so it was maliciously said, outside a pub on a Saturday night). He was One of ‘Kitchener’s Army’ and joined the 10th Battalion, Essex Regiment, who were training in Colchester at the time, and was subsequently stationed at Aldershot before proceeding to the front.

Horace was an excellent musician and must have been a tremendous enthusiast. He worked unstintingly and with the support of some of the officers in order to purchase instruments and music, he formed a band. By Christmas 1914 the 10th Essex had quite a decent brass band, and he was appointed temporary Bandmaster in January 1915. By May 1915 they were ready and able to accompany the regiment as they marched out of Colchester.  In the following June, prior to serving with the British Expeditionary Force in France and Flanders from July,1915, he conducted the massed bands of the Division on Salisbury Plain before His Majesty King George, when a march of his own composition was performed, and he received a commendation.

Upon reaching France, the regiment’s arrival in any of the small Somme villages was an event thanks to the band. Horace was appointed Colonel’s Bugler, and later acting Bandmaster. Yet in the early days Pitt and his fellow musical enthusiasts were excused no duties. Horace was to be seen on sentry duty or working party every day the Battalion was in the line. The band in fact suffered several casualties and Horace had his work cut out when the regiment was resting to get reinforcements trained.

So despite his commitment to the band, Horace still had soldiering to do and on 31st January 1916 he became one of the first soldiers to be awarded the Military Medal, for “Bravery in the Field”.

He was awarded the MM and also the DCM

He must have been a brave man, because a year later in early 1917 he was awarded the Distinguished Conduct Medal for distinguished bravery. In its edition of 5th October 1918 The Essex County Standard reported that his Military Medal had been received by his parents on Thursday, Oct. 3 from the authorities at Warley.

Sadly, during a German offensive on the Oise front, he died on 31st March 1918 of wounds received the same day while advancing as stretcher-bearer with the rest of the Band to the aid of the wounded.  He was buried where he fell and then in the Boves Communal Cemetery on the Somme in France.

Having reported the previous week that Horace had been wounded on the Western front the Essex County Telegraph In its 20th April 1917 edition  reported that: “official notice was received on Tuesday of the death of Drum-Major Horace Pitt, from wounds received in action, on March 31st while advancing as a Stretcher-bearer.  The deceased was 23 years of age. His father, Mr. William Pitt, is on patrol service, and two other brothers are serving. Much sympathy is extended to Mr. and  Mrs. Pitt in their sad bereavement.

His death was also reported in the Wivenhoe section of the 20th April 1918 edition of the Essex County Standard.

On 5th October 1918 the Standard reported that Horace’s parents went to Warley, home of the Essex Regiment, to receive his Military Medal, which is now held by his great-nephew Robert Pitt. [Both the Standard and the Telegraph stated that he received the Distinguished Conduct  Medal early in 1917, but it is claimed this award was never recorded nor gazetted in the London Gazette.]

Horace Pitt was a man who loved music and was so well regarded for his musical efforts by his comrades, that he became known simply as The Bandmaster! His name is recorded on the Wivenhoe war memorial.

and eccentric natives” by Dick Barton.