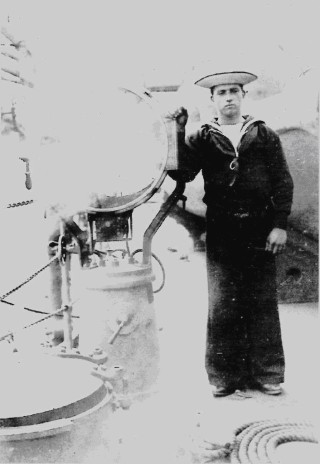 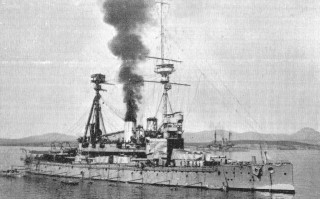 H.M.S. Agamemnon in the Eastern Mediterranean, painted with the stripes described in Jack Green's diary.
I.W.M. 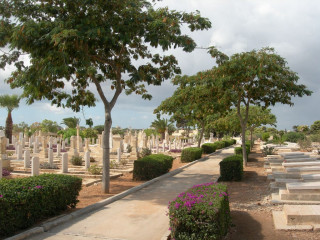 Jack Durrell Green (born 23 Aug. 1898) was the son of Mr. and Mrs. James Green, of Wivenhoe; Durrell was his mother’s maiden name.  He had joined the Navy, and aged 16, while serving on H.M.S. Impregnable, he won 1st prize in the Marconi wireless examination.  The prize (an auto strop and safety razor) was awarded annually in the Navy.  H.M.S. Impregnable was an old steam frigate built in 1861 as Black Prince but, since 1899, had been used as a training ship.  This was where he had learned the art and science of telegraphy at sea; all still very new in 1914.

By the time the prize was awarded, Jack Green was serving as a Boy Telegraphist in H.M.S. Agamemnon.  H.M.S. Agamemnon was a 16,500 ton pre-Dreadnought battleship built in 1906, and was armed with four 12 inch, ten 9·2 inch and 24 12 pounder guns.  When he joined her, she  was part of the Channel Fleet, but early in 1915 she sailed to the Mediterranean.  This was the ship he served in during the Dardanelles Campaign.

He kept a very detailed diary during 1915, which seems to contain a great deal more information than a boy, even a telegraphist, would be expected to have known, which implies that, had he lived, he would probably have been commissioned as soon as he was old enough.  Later, he was serving in H.M.S. Arno when he was taken ill with dysentery; he was taken to hospital in Malta, but died on 16th Sept 1916 aged 18.   He was buried in Capuccini Cemetery, Malta.

H.M.S. Arno was a destroyer with a history,  She had been ordered from the Italian shipbuilder, Ansaldo of Genoa, for the Portuguese Navy as Liz, but sold to the Royal Navy in March 1915 before completion.  Italy and Portugal were both neutral at the time.  She had a short life and was sunk in collision with another destroyer, H.M.S. Hope, on 23rd March 1918 off the Dardanelles..