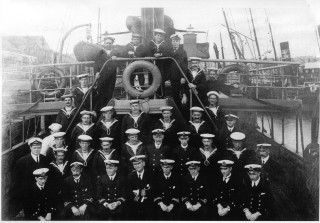 The crew of H.M.Y. Rosabelle during World War One.
Nottage Maritime Institute 04007 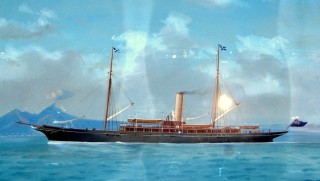 A pre-war pierhead painting of the third steam yacht Rosabelle in the Bay of Naples.
Nottage Maritime Institute 00606

The third steam yacht Rosabelle before the First World War. The white ensign does not show that she is a Royal Navy ship, but that her owner is a member of the Royal Yacht Squadron (an exclusive yacht club at Cowes).
Nottage Maritime Institute 00468

Mr Theodore Pim’s steam yacht Rosabelle was taken up for use as an auxiliary patrol yacht on 28th February 1915.   She served in that capacity until 17th March 1919.  Like many other requisitioned vessels many of her peacetime crew stayed with her, and that of course included a number of Colnesiders.  During her war service she was armed with one 12 pounder and two 6 pounder guns.

In World War 2 she became an armed yacht again, but was torpedoed and sunk by the German submarine U374 in the Straits of Gibraltar.

The 614 ton Rosabelle was built in 1902 at Leith, and was well known in Wivenhoe because, besides the fact that it was home to many of her crew, her regular Winter laying up berth was on the Wall downstream of the Quay.

Theodore Pim successively owned three yachts named Rosabelle and this was the third and biggest of them.  Rosabelle Avenue is named after them all.