You are here: Home>Topics>Events>First World War>Vote of Thanks to the Forces in 1917 by the Houses of Parliament 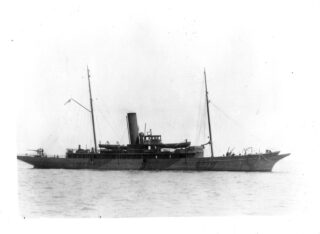 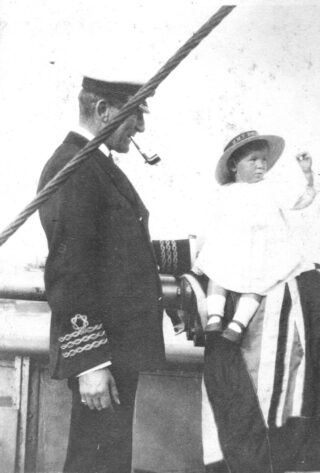 Various speeches delivered on 29th October 1917 by members of the Houses of Parliament relevant to the efforts of people as Captain Ernest Brady who commanded the Steam Yacht Rosabelle owned by Theodore Pim. These speeches were recorded in a booklet published by HM Stationery Office entitled “Parliament’s Vote of Thanks to the Forces.”

By Earl Curzon of Kedleston:

……………………. there is another paragraph a little further down which is without precedent, and which includes the officers and men of the Mercantile Marine, whose services are so closely interwoven with those of the Navy that I ask your permission not to separate them in my remarks. ……….

Equally wonderful is the record of the auxiliary naval services, which have been expanded to an extraordinary degree to meet the changes that have occurred in maritime warfare by the development of the mine and the submarine. I allude more especially to the minesweepers and patrol vessels. Over 3,300 vessels are now engaged on these duties. At the beginning of the war there were 12. They were out in all weathers, day and night, searching and sweeping for mines. patrolling the coastal routes, escorting merchant traffic, hunting the enemy submarines, It is impossible to imagine a more arduous or a more dangerous duty. Never a day but they may be in contact with a mine or torpedo; never a week but some of them are sent to the bottom; yet in all this time of stress not a single man has asked to be relieved, and if one man is lost scores leap forward to take his place.

I could detain you this afternoon for hours with tales of personal gallantry ; but we are here to-day to place the crown of glory on the heads, not of individuals, but of the Navy as a whole.

I said just now that I would ask leave to say a word or two about the Mercantile Marine and the amazing service that it has rendered in every theatre of war. What has Ihis service been? In the first place, these men have provided a large part of those auxiliary services to which I have been referring—the mine-sweepers, the patrol boats, the Fleet colliers, and the blockade vessels. Then steadily, in spite of constant danger, they have kept up the flow of British im­ports to this country, conveying to these shores the food on which we live, the wool and cotton by which we are clothed, the raw material of every industry. Equally the Mercantile Marine has been the carrier and purveyor and feeder of our Allies. But I am not sure that its most wonderful achieve­ment has not been the continuous service which it maintained across the Channel and to the various theatres of war. Week in and week out, in all weathers, proceeding at full speed in tbe fog and the darkness, navigating without lights, swept by heavy seas, they have carried the soldiers to their des­tinations and brought back the wounded to these shores. Think of the responsibility that lies upon the captain of such II vessel. Always on the bridge, sleepless for nights at a time, he knows that on his vigilance depend the lives of thousands of the soldiers of his Sovereign. Remember that both for him and for his men there may spring at any moment from the ocean the menace of sudden death—the rush of a torpedo, the firing of a gun, and the vessel sinks down into the great deeps and is lost. Then follows the tumult of evacuation, the agony of the boat drifting on the stormy seas for days and nights at a time with the most precarious chance of rescue. Many vessels in this way have been torpedoed several times over. The lives of the men of the Mercantile Marine that have been lost number 8,000. But never a man has been found who refused to sail. This is a record that brings a lump to the throat and tears to the eyes, and it has invested with an everlasting renown the name and service of the British Mercantile Marine.

By The Marquis of Crewe:

Page 28 Confidence in the Navy.

…………….. And with what reinforcement of our seafaring race does that Navy now continue to guard us? The patrol vessels, the minesweepers, the trawlers, the drifters – those have all received their meed of praise.  ………………

By the Earl of Selborne:

When I was at the Admiralty it was not possible to feel a more implicit and unlimited confidence than I felt in the courage, the devotion, the endurance, and the professional rapacity of the officers, warrant officers, petty officers, sea­men, stokers, and marines of the Fleet. It was not possible to have had a more implicit belief that when the day of trial came there would be no failure, and therefore nothing that has happened has surprised me. But the country does \\ant reminding again and again, how tremendous have been the services of the Fleet, partly unrecognised because they are comparatively obscure. I should lay stress particularly on the supreme seamanship, the wonderful efficiency which has enabled this service to be carried on for three and a half years, without cessation, in all weathers, with the minimum of mis­hap or misfortune. And then there is the Fleet Reserve of seamen, stokers, and marines who had served in the Fleet and taken their discharge. Behind them are the Royal Naval Reserve, the men of the Mercantile Marine, fishermen, and the men of the Royal Naval Volunteer Reserve, many of whom were landsmen, clerks, mechanics, and artisans. The whole of that wonderful auxiliary service which Lord Curzon so beautifully described, especially that of the mine-sweepers, has been done mainly by men of the Royal Naval Reserve — by fishermen turned King’s sailors. The youngest Service of all, the Royal Naval Volunteer Reserve, has taken its place and worked on board ship with the men of the profession, and has fulfilled all our aspirations.

Page 38  What Minesweepers do:

The fishermen on the trawlers and the drifters go out to almost certain death every time. What do they go out for? They go out to clear the fairways of the mines so that the vessels in which their comrades are coming, bringing food and raw material from over the waters, should have a clear way into the harbour. They run the risk of being destroyed by submarines outside, and then they run another risk of being destroyed by mines when they get into the fairway; and other men go out every day and every night sweeping for thc mines. …………..

I would like to say a word about our fishermen. Their contribution has been a great one. Sixty per cent, of our fishermen are in the Naval Service. Their trawlers are en­gaged in some of the most perilous tasks that can be entrusted to sailors—that of mine-sweeping, a dangerous occupation often ending in disaster. The number of mines they have swept is incredible, and if they had not done this Britain would now have been blockaded by a ring of deadly engines anchored round our shores. But their services have not been confined to this. You find their trawlers patrolling the seas everywhere, protecting ships, and not merely around the British Isles. You find these fishing trawlers in the Medi­terranean. These men surely deserve the best thanks that we can accord them for the services which they have rendered.  ……………..

Extracted by Patrick Brady, grandson of Capt. Ernest GH Brady, from a booklet published by HM Stationery Office in 1917