The Wivenhoe Voluntary Aid Detachment was started in 1910

by Helen Polom and Joan Sawyer

Badge issued to all serving Red Cross Society members working closely with the Essex Territorial Army. This scheme was developed by the War Office from 1907 onwards to provide voluntary aid in the event of war to any territorial forces.

Information about the formation of VADs and the names of VADs who qualified for Red Cross Awards in Essex can be found at www.essexregiment.co.uk

Organisation in a Voluntary Aid Detachment

VADs tended to be led by a prominent lady in each county.

Lady Warwick of Easton Lodge whose husband was Lord Lieutenant of Essex was asked by the Territorial Forces to lead the Red Cross and VAD network in Essex. Each district then had its own commandant who led the work of the VADs in their area and each individual Voluntary Aid Detachment was led by a commandant. www.essexregiment.co.uk   holds information on all the WW1 VAD units in Essex.

The Unit Commandant led a group of 20 women which included a quarter master in charge of stores, two cooks and 1 trained nurse as lady superintendent who had completed 3 years training at hospital with a training school attached. We don’t know if Wivenhoe had a trained nurse.

How it all started in Wivenhoe

According to the Essex County Standard (ECS), a meeting was held on 24 September 1910 at The Castle Library, Colchester for the purpose of assisting the formation of Voluntary Aid Detachments in the district of Tendring and Lexden and Winstree under the auspices of the British Red Cross Society. Mr John Bawtree Hawkins of Ballast Quay Wivenhoe was named as being in attendance at that meeting.

Just 2 months later the Wivenhoe News column in the ECS November 1910 states that a meeting had been held in Wivenhoe in connection with setting up a Red Cross Voluntary Aid Detachment in the town. It was Mr John Bawtree Hawkins who presided over this meeting. Mrs H.R Oakley was elected Hon Sec. (interim)

It seems that women in Wivenhoe were keen to become involved. By January 2011, 14 ladies had obtained a certificate in First Aid.

More ladies followed during the following years. These are all listed in Names of Red Cross Members.

The Wivenhoe Red Cross Society under Miss Dewhurst (indicating she was Commandant) appears to be the only group in the District that marched along with 500 National Reservists on Territorial Sunday June 1912, according to the Essex Chronicle.

“At Wivenhoe a 13 bedded rest – station has been prepared and the local detachment under Miss Dewhirst has been mobilized”. 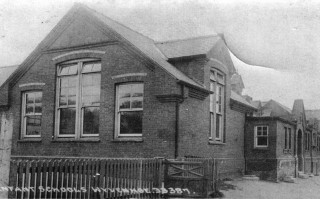 The former Infants and Girls School at Phillip Road

“Owing to the schools being fitted up as a hospital and used by the local Red Cross Detachment the weekly meeting of The Brotherhood was postponed”.

The infant and girls school at that time is what we know today as The Phillip Road Centre.

What was a Rest Station?

Rest – stations were usually found at ports, railway stations and “halts”. They were almost always staffed by VADs. They were set up by the WW1 Joint War Committee at locations at home and abroad at places where trains would stop in order for men on board to receive meals ,sandwiches, drinks, comforts and first aid in the form of minor dressings.

The infant school was located adjacent to the railway line and close to the port, in Wivenhoe. 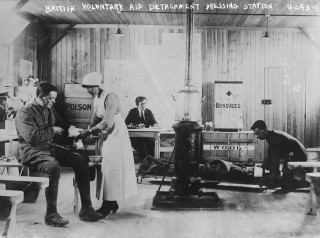 There is no mention of the rest – station again.

Newspaper evidence suggests that St Botolphs station was where the wounded arrived and fleets of cars/ambulances took the injured to the Military Hospital at the Garrison or other larger auxiliary hospitals in the Colchester area. It is likely the rest-station was not required.

The role of a Red Cross Detachment was to identify equipment and to provide equipment and staffing to local hospitals. All the hospitals were closely linked. The Red Cross Volunteers volunteered for a number of hours each week on wards where injuries were not life threatening or patients were convalescing.

The Red Cross Record cards held by the Red Cross Society indicate the role each woman had, how many hours they worked and the period of service they were enlisted. These cards are currently gradually being digitized and may be searched for at http://www.redcross.org.uk/About-us/Who-we-are/History-and-origin/First-World-War 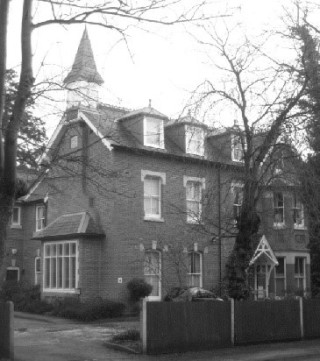 Cambridge Road Colchester. Gostwycke House initially treated only Territorials but by September 1915 it had become a branch of the General Military Hospital and received the wounded from there.

The Wivenhoe Red Cross Society along with other organisations in Colchester such as the Conservative and Unionist Ladies League carried out many fundraising activities for the purchase of equipment for these hospitals.

The British Red Cross Society informs us that nationally, £22 million was raised during the period 1914 -18 which would be equivalent to between £1 and £6 billion in spending power today. www.measuringworth.com

The women who joined the Wivenhoe Red Cross Detachment would have had to purchase or buy materials to make their own VAD uniform. Patterns were issued for this purpose and were even printed in local newspapers.

In the early stages of the war some VAD ladies were given the opportunity to serve overseas  particularly if they spoke French.

According to her War Medal Record, Helen Hawkins first arrived in France within weeks of the declaration of war, August 1914.

The departure of Madeline Dewhirst to France was announced in the ECS January 1915.

“Red Cross Lady for the Front”

These ladies are also mentioned by name  in the “Colchester War Memorial Souvenir”, The Great War 1914 – 1918 published by the Essex Telegraph.

Following the departure of these ladies for France, Mrs Sophie Barlow, wife of Alexander Barlow of Wivenhoe Hall, took over as Commandant of Wivenhoe Red Cross Detachment and continued in this role until the war ended. Her duties listed on her Red Cross Card was stated as “organising nursing”.