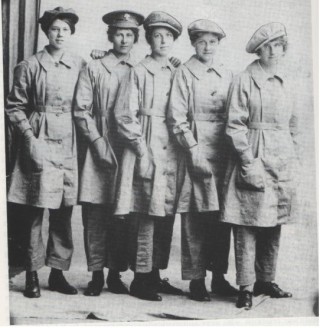 We know at least one of these girls was doing her bit in Wivenhoe for the war effort but were they really working making Munitions as their uniform suggests?

Can you help us solve the puzzle?

Grace Howard (second from right) and her sister Dolly (third from right) arrived in Wivenhoe with their mother, father, sisters and brothers in December 1914. Grace’s Aunt was married to William Jones the Blacksmith at the forge, Wivenhoe Cross and her other Aunt lived on Ballast Quay farm and had the coal business at Jolliffes Yard. Their mother and father and at least some of the children left Wivenhoe just 6 months later in July 1915 when their father was stationed in the Military Foot Police in Ipswich. Did Grace and Dolly stay on in Wivenhoe?

By 1915 women and girls were being employed in roles that were formerly seen as “man’s work” as the majority of men of working age were called up or volunteered to join the army. There is no doubt that by this time, according to the Essex County Standard, there was a shortage of male labour in Wivenhoe.

Grace tells us in an oral history interview in 1992 when she herself was 92, that this was a great opportunity for her and many Wivenhoe girls.

“I applied to the shipyard in Wivenhoe(Rennie Forrestt Engineering) because I wanted the money……26 shillings and 6d a week. The men got more because they turned out the stuff. We painted the first coat…windows….not allowed to put the second coat on…we used small ladders. We started at 6am.”

Looking at the photo you may think there is nothing significant about the smart trousers, tunics and shiny lace up shoes. At the time the photo was taken this was unusual clothing for women.

According to Kate Adie in her book “Fighting on the Home Front”. She tells us that the munition plants were among the first to engage women in often filthy and dangerous conditions, and even they compromised initially by having the women wear tunics over trousers. Was that the work that these girls were doing?

As far as we know there was no official report of munition working in Wivenhoe so perhaps the photo was posed and used to advertise for munition workers in the factories that we know existed in Colchester and Braintree. Or did munition work in fact secretly take place at Rennie Forrestt Shipyard and Engineering Works?

Note the assortment of hats. Were they just a collection of odds and ends available for the photo? One woman is wearing an army hat with what looks like a Grenadier Guard badge. Can anyone help identify the badge?

Footnotes:  a)  Permission kindly given to use this photo and his mother’s oral recording by Mr Charles Scofield (oral recording to be added to this page later).