As part of the Heritage Lottery Funding 2014 – 2016 my role was to work with local schools to help
provide children with a greater understanding of World War One.

The topic is not an easy one for this age-group, the information had to be simple and yet meaningful. Ideas were suggested; discussion, work and activities then followed. The initial idea was to involve young people in remembering this time through art and textiles. 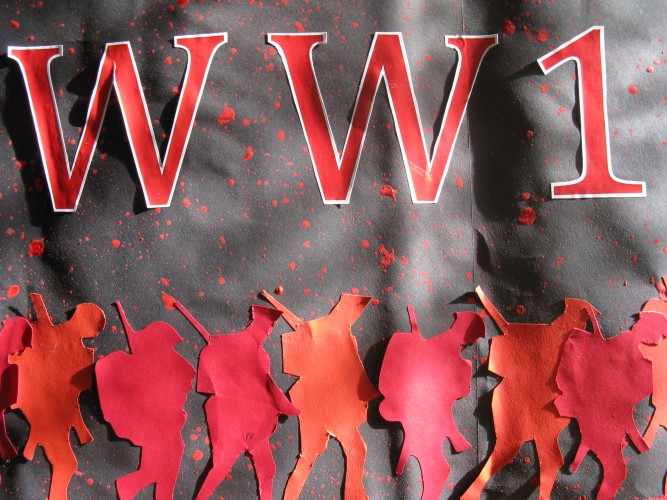 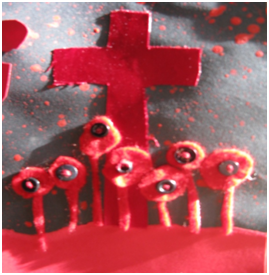 These felt poppies have buttons for their centres.

The schools displayed their first pieces of work at the History Group talk given by Paul Rusiecki on the ‘ Impact of Catastrophe’ which focused on the people of Essex and the First World War.

The children’s work stayed on display in the church for the Civic Service and the poppies for the Remembrance Service.
The displays then went back to the schools for parents & the other children to appreciate and value. Year 6 looked at poems by the war poet Wilfred Owen and after much discussion they wrote their own very moving poems which reflected the emotion & reality of war.

These poppies were made of red spinnaker material and had a black wool pompom centre. 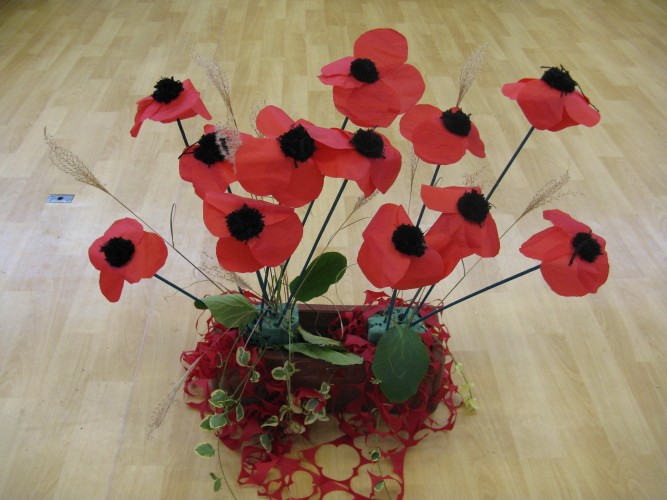 An artist came to the school to help the children develop their ideas in textiles. 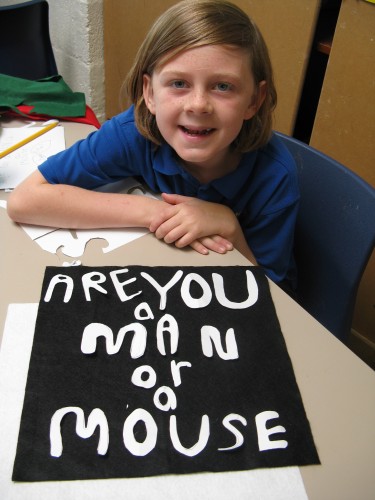 The posters were to encourage soldiers to sign up 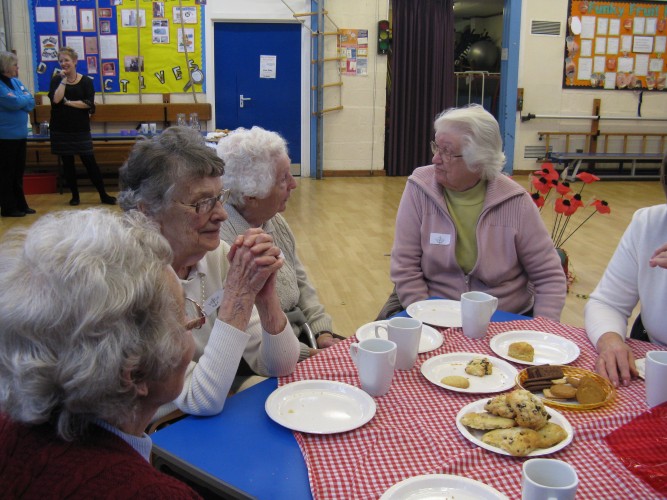 As a more formal way of remembering those who lost their lives in WW1, Broomgrove Juniors invited people for afternoon tea. The school choir entertained everyone with songs from this period e.g. ‘ It’s a Long way to Tipperary ’ and the guests joined in the singing. 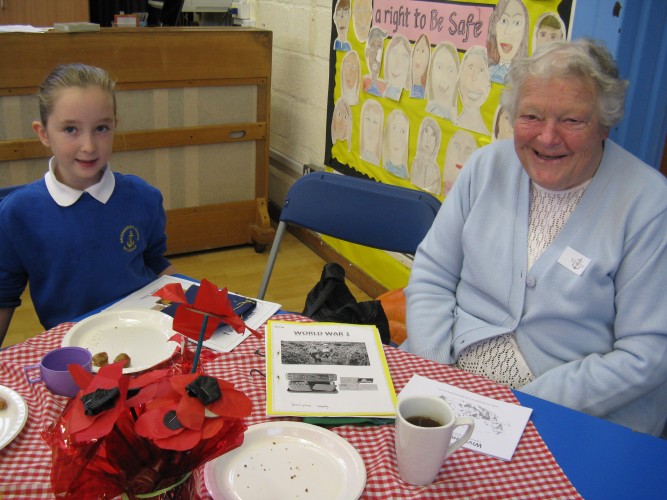 Year 5 brought along their research and talked informally to the guests about their project.

Everyone enjoyed home made scones, cakes, tea and squash. The guests really appreciated talking to the pupils and the effort the school had made in providing them with a lovely afternoon.

Books also gave teachers and children inspiration for their work.

Broomgrove Infant School had a visit from Veronique Eckstein to talk about her book ‘Mersea Mick’ and this provided a fun way to learn a little more about WW1. She brought along her large cuddly dog Mick, first world war model aeroplanes, old copper pennies and various other things for the children to see and handle. The children had a fun morning which was followed up by making model aeroplanes, old maps, writing story clouds, drawings & discussions about the story. 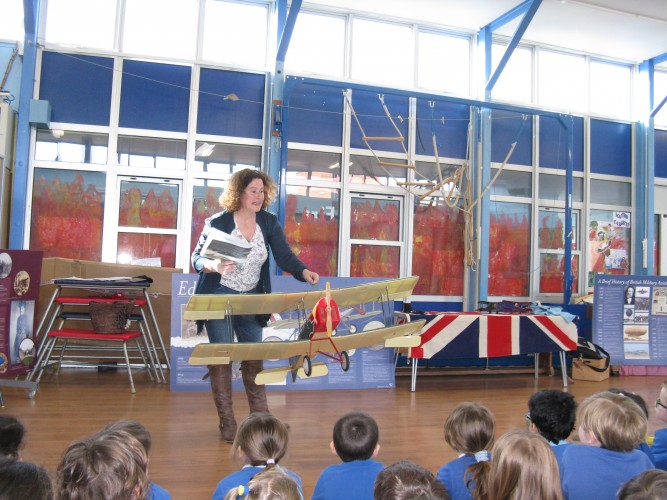 All the children wanted to cuddle the Mersea Mick Dog. 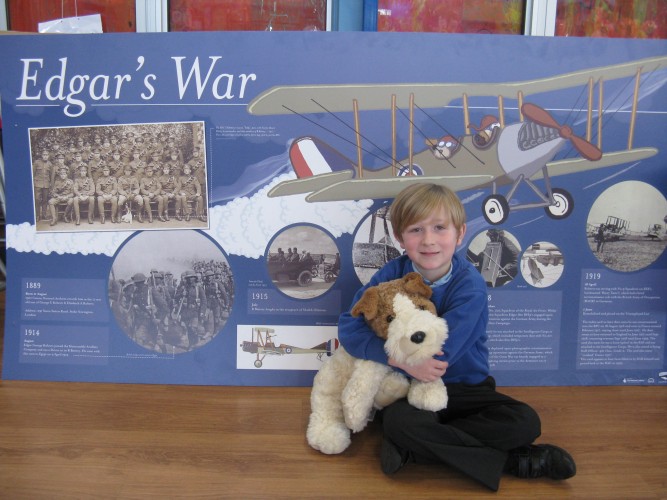 The large story boards told the background story of what was happening at the time of WW1 and the children were given old fashioned copper pennies with dates ranging from 1914 – 1918. They then had to try to match the pennies with the dates on the boards.

The children really enjoyed the story and having a new story teller who brought in some unusual things for them to see and handle. As a result the children produced some lovely work. this was an impressive picture which shows a WW1 plane and the two children in the story with their rowing their boat caught out in a storm and landing on an island. The children made their own aeroplanes too. 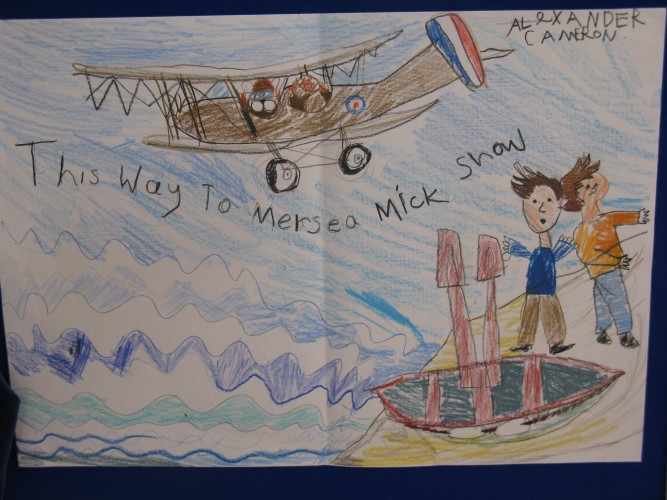 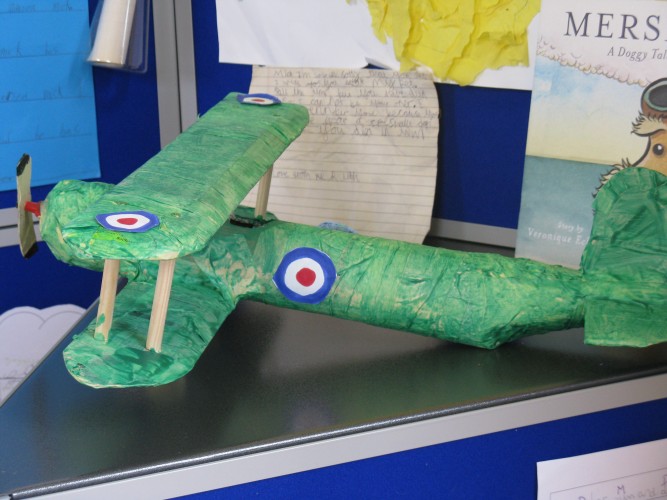 It was good to meet up with children at the Memories Exhibition as they were so enthusiastic about the work they had done for the ‘Mersea Mick’ project. Many of the pilots at that time had dogs as mascots and some flew with them on practice flights, Mick was a dog from Mersea Island that flew with a World War One Pilot. ‘Archie’s War’ helped pupils understand what growing up during WW1 was like. The older pupils imagined what it would be like to grow up during 1914-1918 with no T.V. or games console, so they produced board games that had a war theme.

They looked at ‘Archie’s War’ a scrapbook with lots of information about this time. The author of this book imagined that a boy had been given a scrapbook for Christmas and in it he recorded events that happened during 1914 – 1918. These facts helped them design their game and gave them insight into that period of time. 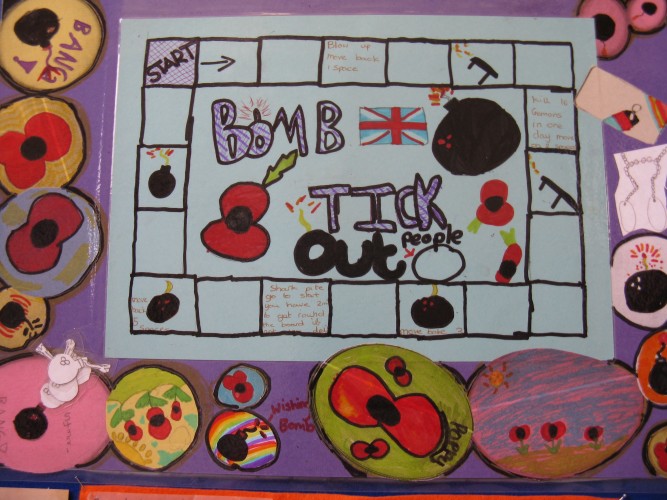 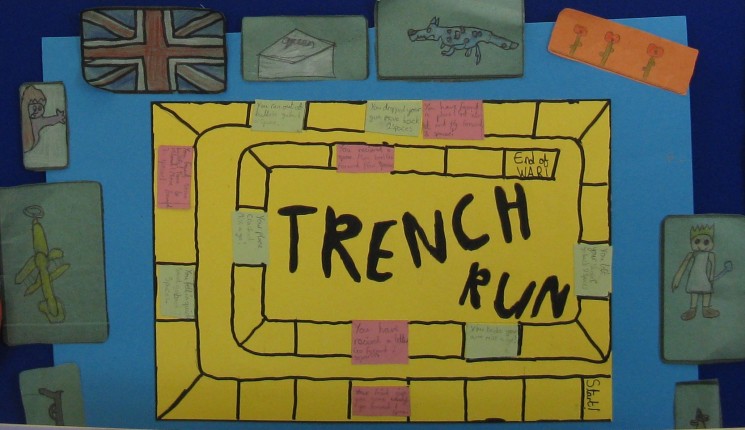 School Displays for the Memories Exhibition 2015 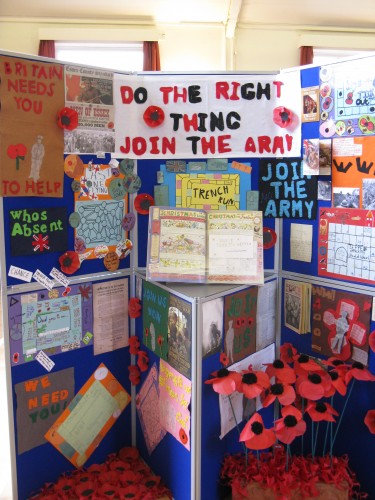 They made poppies from the base of plastic bottles, painted them red with black paper centres. Year 4 were inspired to make these really bright and attractive poppies to commemorate the centenary of WW1.  The poppy field print was made by the reception class. These displays from the schools were all very impressive and showed the children had enjoyed making their work come to life through art & textiles. The general public who visited the Memories Exhibition gave lots of good comments about the work displayed and they said that the WW1 poems were very moving.