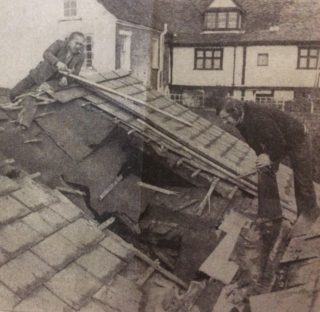 Vic Pilkington, the Landlord of the Rose and Crown, Wivenhoe, looking up through the hole in the roof.
Laurie Honeyball, Roger Tamblyn, and Tony Tasker, Photographic Team, Essex County Standard 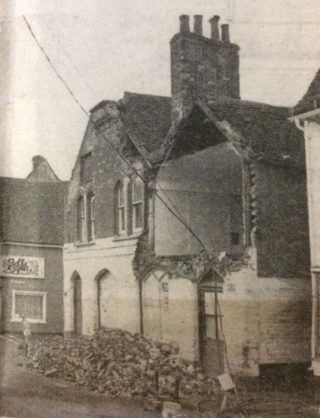 Hundreds of pounds’ worth of damage was caused at the weekend by gales which were amongst the most terrible North East Essex can remember.

A family living in a council house in Wilson Marriage Road, Colchester had to be moved out when storm damage made the house unsafe.

Mr Ken Brown, manager of Eastern Electricity’s Clacton district, which stretched from Harwich to Tiptree, reported 176 incidents affecting 2,000 consumers – though by Sunday night power had been restored for about 1,900 and things were more or less completely back to normal by Tuesday.

Commented an Eastern Electricity spokesman “Every village in North East Essex suffered cuts from tree damage. I can’t remember a storm like it in my 11 years experience”.

Hundreds of North Essex telephones were still out of order on Monday after overhead lines had been brought down and power to rural exchanges cut. Said a Post Office spokesman “Our engineers have been working all weekend to remedy a chaotic situation.” Things were virtually normal again on Wednesday.

Colchester soldiers gave a helping hand to people in Leavenheath, where the Post Office and village store looked like losing power for several days because Eastern Electricity was so snowed under with work.

After an appeal by sub-postmaster Mr Arthur Harding, soldiers from the 19. Airportable Brigade Signals Squadron rigged up a generator on Saturday to provide light, heat and refrigeration.

Said Mr Harding: “We really are most grateful.  Most of the village rely on the shop for food, and a great deal would have gone if it had not been for the army”.

Tendring Council reported between 30 and 40 chimney stacks blown down, and the Yachtsman’s Arms at Brightlingsea had to be cleared when the chimney and masonry crashed through the roof.

A chimney stack also fell through the roof at the Rose and Crown on Wivenhoe Quay and it was reported that a woman lost £130 in banknotes, which was blown away when she fell over near the Flag public house at Wivenhoe.

At the coast Brightlingsea and Frinton and Walton beach huts were severely damaged or blown away; mobile homes at Dovercourt were extensively damaged; and the British Rail Sealink ferry St George, operating from Harwich, was damaged and withdrawn from service.

Edited extract of the complete article by kind permission of the Essex County Standard. Copy of the newspaper article kindly donated by Gilly Primrose.