You are here: Home>Topics>Events>Second World War>The building of parts of the WWII Mulberry Harbour in Wivenhoe

The building of parts of the WWII Mulberry Harbour in Wivenhoe

Built for the D-Day Normandy landings in 1944 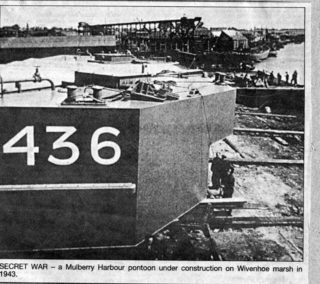 In 1944, sections of the Mulberry Harbour pontoons were constructed on the marshes next to Wivenhoe Shipyard, now the Port estate.

Wivenhoe did its bit for the war effort, as well as 55 ships and other craft built here during World War II. Click here for information about the Wivenhoe Shipyard which was re-opened by the Government for the war effort and ran by the Rowhedge Iron & Steel Works from the other side of the river.

Started in 1943, Dorman Long and Co. took over an area of marshland just upstream from the Wivenhoe Shipyard.  There the company built a number of large and small floating steel caissons for use during the forthcoming invasion of Europe. The caissons were intended to be brought into service to seal lock and dock entrances destroyed or damaged by demolition or other enemy action after being towed across the Channel.

An area of the saltings of about 3 acres was involved. 12 cranes, each of 30 ton lift, together with railway lines, concrete pads and roadways were built on the marshland to enable the units to be built on a production line basis. Initially it was planned for 151 large and 151 small units to be constructed, however only about one third of the number were actually made.

10,000 tons of steel, and some 3,000 tons of timber, was allocated for the original scheme. The dimensions of individual units, which could be bolted together to form larger caissons were: height 30 feet; width 7 feet and length 40 feet.

Chris Whaley: My grandad worked on them & said they where built like a honeycomb inside. To make getting out easy they followed a length of string they had unrollled as they went in.

Tonia Worledge: Although not a Wivenhoe man, my grandad (William Robert Bright, Royal Engineers WW2) together with his unit, laid the pontoons in the Mulberry Harbour, France. I never knew they were constructed here so thank you x
John Jr Bowes That long shed in the background was dismantled after the war and erected at the farm, a small part is still standing today. Another part of that shed was erected behind Waite’s electrical shop which I think is still there, so my dad told me.
Derek Chaney There was a very big stack of steel left after the war that us kids used to crawl through, how scary that all seems now.
Georgina Susan Thanks for this John. My cousin wrote about the Mulberry Harbour pontoons in his memoirs of the year he lived in Wivenhoe (where he mentioned the Rest and Be Thankful lol) and I had no idea what they were but now I do thanks.