Wivenhoe and the Earthquake 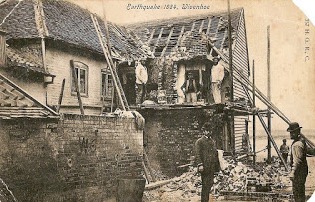 Describes the impact of the Essex earthquake which struck at 9.18am on Tuesday 22 April 1884 and was the strongest ever experienced in England. The main structural damage occurred in north-east Essex and in particular in Wivenhoe. An extract from the Essex Telegraph of Saturday 26 April tells the story in great detail and there are several illustrations of the damage caused to buildings.