Which once formed the Parish Boundary between Wivenhoe and Elmstead 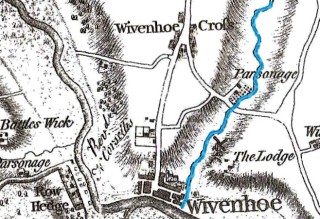 The Brook once formed the parish boundary between Wivenhoe and Elmstead and its course can be traced in several historic maps. The most reliable is the 1923 Ordnance Survey map where the countryside is still relatively open and the Brook is clearly marked for the full length of its course. On this map the source of the Brook commences on Wivenhoe Heath. It crosses the Elmstead Road and, after making a sharp south in the vicinity of Broadfields, flows in a south-easterly direction a good way to the east of the Flag and the Cross, on its journey down towards Rectory Road and Chamberlain’s Pond. It then crosses under Rectory Road, through what is now Littlefield’s estate (where it forms two ornamental lakes); from there it is culverted through what is now Dene Park estate and Valley Road to Queens Road, where it briefly emerges from below ground and passes under the road bridge; it then passes under the railway line to Brook Street and the former Cook’s shipyard development where it is channeled away into the marshes. The first known reference to Brokestrete itself is in the unpublished court rolls of 1509.

There is much anecdotal evidence about the Brook and references to it once being a much wider water course used to carry ballast to ships on the River Colne, but no evidence of this has yet been found. Certainly the Brook contained a sufficiently strong flowing body of water to run a watermill from the earliest times until the latter part of the seventeenth century and to support a trade in eels. The water was also sufficiently clean enough to form an essential part of the town’s water supply. Water was fetched in buckets for personal use, or residents bought water from the tank on the town water cart, which had been filled up from the Brook. However by 1866 a medical report revealed that the water had become polluted by householders’ sewage. To find a new source of clean water a borehole was dug in the dip in Queens Road in 1901 which found water at a depth of about 150 feet estimated to produce 6,000 gallons per hour. The quality was deemed satisfactory and in 1902 the WUDC opened a waterworks at Queens Road to pump water from the borehole to a water tower in Tower Road, west of Wivenhoe Cross.

The Brook, running through the base of a steep sided valley (possibly an indication of a more ancient watercourse), was an important asset for the town. Not just as a source of water and early industry but also a popular recreation site for local families before it was culverted away under successive housing developments. Residents have recorded their memories of picnicking and playing by Bobbits Hole in the summer, and they described how lovely the Brook was with a nearby garden and apple trees, and how as children they used to paddle in the Brook and catch frogs and watch them hop. In the winter when it snowed people had great fun sledging down the steep sided slopes towards the Brook.

In the nineteenth century, that stretch of the Brook which ran through the Wivenhoe House Estate owned by William Brummell (brother of Beau) was landscaped into two large thin lakes with a bridge across the middle. This feature is certainly in the right place to be a section of the Brook and it continues on from where the Brook is shown on the 1923 map as it runs along at the bottom of the long thin gardens belonging to the houses on Bellevue Road, built at the turn of the century.

The Brook is still there although much of it has been culverted away. It never dries up in the hottest of weather and periodically springs have burst through nearby roads and there have been episodes of flooding in its vicinity. In order to manage this the Brook was enmained as a main river by the Environment Agency in April 2006.

For further information see the downloads below: