You are here: Home>Topics>Maritime>Boatbuilding>About the STS Lord Nelson built at Wivenhoe in the late 80s 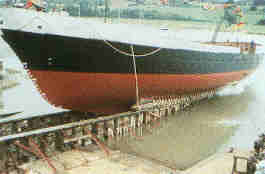 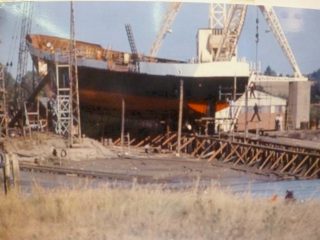 The STS Lord Nelson under construction in Cook's shipyard 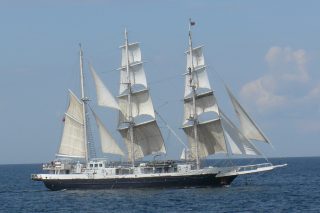 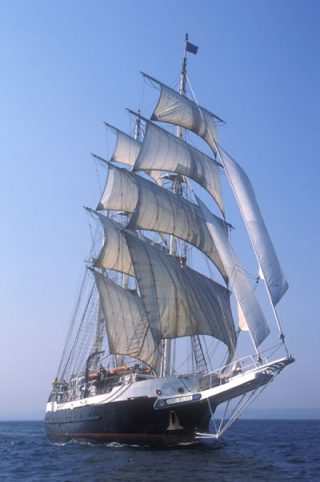 Some time around 1977, Christopher Rudd was sailing at Bule Water in Kent when he observed a number of people with various disabilities watching the proceedings.  At this time there were limited facilities for people with disabilities to go dinghy sailing, but deep water and tall ships….not a chance…unless we count Long John Silver!

From that moment, he campaigned tirelessly, giving talks, raising funds etc. until the Jubilee Sailing Trust was formed in 1978 with a good kick off from the Queen’s Silver Jubilee Fund.

It was during that time that the people of Wivenhoe first heard of the idea, when Christopher Rudd gave a talk at the Nottage. Three ships were studied for early trials, The Marquis, STS Royalist and the Soren Larson. The latter was owned by the Davis brothers of Colchester and came to the River Colne as a Baltic Trader. After being converted and fitted on the River Colne in Essex, she was finally selected for the job. She had already earned fame in The Onedin Line TV series.

A beautiful little ship, still sailing today for Tony Davis in the southern Hemisphere, Soren Larson was a great success….so much so, that the need for a larger, specially designed tall ship was apparent.

More fund raising and much effort ensued with the Duke of York as Patron and Francis Cator as chairman of the Trust.  Colin Mudie, a well known yachtsman, adventurer and designer was commissioned to design the new ship.  Local people began campaigning to raise funds, after all, we had the ideal yard to build the ship right here in Wivenhoe.

It is ironical that with Wivenhoe’s long association with the sea and sailing ships, one of the last ships to be launched here, in 1985 (apart from a small barge), was the three-masted steel barque Lord Nelson.

So, the keel was laid and the project helped by a large donation from the millionaire Jack Hayward. Even with the expertise to hand there were many problems….men at the yard grumbled that the ship was designed by a committee…but this was inevitable…the Trust was still in a learning curve. But she took shape and local people could watch her grow on the ways until the grand day of her launching and naming as the Lord Nelson. Most small yards were having financial difficulties at that time and Cook’s was no exception.

At this stage she was without her masts and spars so not a ship of beauty…the fishermen thought she “looked like a slab sided old coaster” and when the broad bowsprit went on with its wheel chair ramp it did look strange. As she lay in the fitting out basin there were growing financial problems.

Saved from the Receivers

One misty morning in the early hours of May 26th 1986, Jan Sinclair received a call.  ‘Come down quickly, the ship is being towed away before the Receivers can get her and we need volunteers to help with fenders’. Hundreds of people seemed to find out and she slipped away to an eerie and sad silence, a complete contrast to the cheers at her launching. She was the last of a long line of ships to be built on the River Colne and the end of an era, hopefully not to be forgotten as industrial Wivenhoe becomes desirable Wivenhoe.

Vospers of Southampton took on the job and then they had a dispute.  She went to a yard on the Isle of Wight which subsequently closed…at that time all the small yards were following the same route… and so she returned to Vospers where she was finally completed.

The Lord Nelson came back to Wivenhoe in 1998

The JST had put a million pounds ‘up front’ and there ensued a long fight to retrieve some or all of this from the receivers.   The Lord Nelson was not mentioned for a long time with favour in Wivenhoe but by 1998 when we persuaded the Trust to allow her to return to her birthplace, with difficulty in a much silted up river, people lined the banks and she was cheered home.

As many as possible of the people who had built her were contacted and given the chance to see what they had created. They also saw and heard at first hand from the voyage crew what effect the ship had on peoples lives.  Sadly one or two of the builders could not face it even after all those years, but those that did went away smiling and a ghost was laid. Most people knew that whatever ship had been on the stocks at that time of building, would have suffered the same.

What we now know is that the sheer tenacity of all those who saw the project through produced a first in the world and has changed thousands of lives. Now the JST has built a second ship to meet the demand.

How strange that the sponsor from America who put up the vast sum to choose the name of our second ship should choose “Tenacious”.

Of these  7,064 people were physically disabled and over 2,860 were wheelchair users

Dimensions of the Lord Nelson:

» Soren Larson was fitted with tracks on the decks for wheel chair users. Thankfully they did not work and freedom of movement became the order of the day.
» Of all the disabled groups, the second largest has been those suffering with blindness. The ship has sailed over 240,000 miles to date.
» More able bodied people have suffered with sea sickness , been ill or had minor accidents than disabled.

Why build a second ship??

The Lord Nelson will not last for ever and could not meet the demand for voyages, hence the building of Tenacious. She has been built out of wood, unlike the steel hull of the Lord Nelson. A wooden ship of this kind is more expensive but Lloyds already estimate a potential 60-100 year life, against 30-40 for a steel ship.

Who would be daft enough to use unskilled and semi-skilled amateurs alongside professionals in a shipyard environment ?

The Trust’s director was convinced of the need to involve the large number of disabled and able bodied supporters of the Trust in a more direct way and a wooden ship lends itself to such an ideal.  The strip plank method is very labour intensive, hence the need for a number of unskilled workers…it really worked and the shop floor atmosphere was terrific.

Who in their right mind would build a wooden ship of this size these days?

Steel is too specialised without the broad skill base of wood and it is dangerous.  It was a brave decision to start the project.  Once again, the JST has broken new ground.

The Project cost for Tenacious is £14.3 million

Lottery Sports fund awarded £6.5 million.  Total of £11.8 million has been raised…only another £2.5 million to clear the debt!!

To see more about what the Jubilee Sailing Trust has achieved, see its website:  www.jst.org.uk