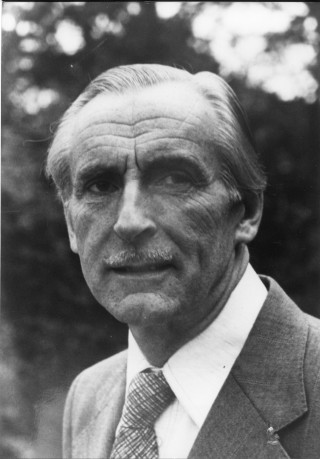 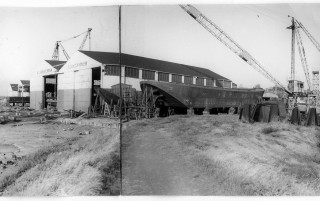 James W. Cook's big shed (the one that James Husk did not want to buy), with some lighters being built in the foreground. These lighters are typical of the large number the firm built for their subsidiaries. This picture was cropped from a panoramic view of the yard, hence the join in the middle.
Nottage Maritime Institute 02329g 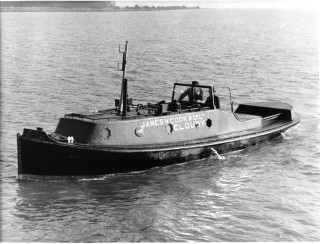 At the end of World War 2, Vospers had no further need for their shipyard in Wivenhoe, and the Government offered to return it to James Husk, BUT, they expected him to buy the new building sheds that had been erected to build the M.T.B.s.   James Husk had no need for such large buildings, nor did he have the money to pay for them.   In any case he was hoping to sell up and retire.

A London based coaster and lighterage firm, James W. Cook & Co. Ltd, who were looking for somewhere to repair and build steel vessels for their own account became aware of the vacant shipyard when one of their coastal tankers was being dry docked at Wivenhoe.  They bought the yard in March 1947 and formed a subsidiary company to run it. Later they began building to outside orders.  In 1963 Cook’s became a wholly owned subsidiary of William Cory & Son Ltd which in turn was acquired by the ‘Ocean’ Group in 1972.

The first vessels to be built by the yard’s new owners were two small tugs and nearly thirty lighters that the company needed urgently to replace those which had been lost or requisitioned during the War, or simply worn out by wartime neglect and over use.