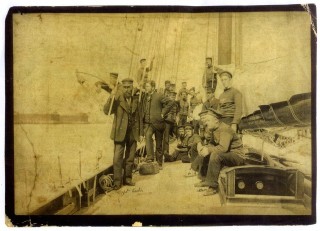 Photograph taken in 1885 of the crew aboard the America’s Cup racing yacht Genesta.

Standing with his hand on the rigging is Captain John (Jack) Carter and standing at the back is James (Friday) Green, both from Wivenhoe.

Compiled and contributed by John Carter in Leeds whilst researching his family history.

Born in Wivenhoe in 1850, John Carter began sailing at a young age aboard “smacks”, the typical fishing boats of Rowhedge and its neighbourhood. At the age of 22, he helmed small yachts and in 1875, he distinguished himself as the skipper of the 10t-ton Lancer and later of the 110-ton cutter Moina.

His reputation led to him taking command of the Genesta, the English challenger for the fifth America ’s Cup. The American yacht Puritan won the first race. Carter sailed beautifully in the second race and was leading at the outer mark but the Puritan overhauled the Genesta in the race in and won by just over a minute.

During his stay in the United States, Carter sailed Genesta to win three prestigious trophies: the Cape May Cup, the Brenton Reef Cup and a cup presented by the Commodore and Vice-Commodore of the New York Yacht Club. At the close of the1887 season, Captain Carter sailed Genesta to victory in the first round British Isles race, held to commemorate Queen Victoria ’s Jubilee.

John Carter’s highest honour came in 1893 when he took command of the Britannia, the newly built yacht of the Prince of Wales, the future King Edward VII. Between 1893 and 1897, he sailed 219 races, winning 122 and placing second 25 times.

In 1897, he was recruited by C.L. Orr-Ewing MP to skipper the Rainbow, the first modern schooner built in Britain. Two years later however, when the Prince of Wales offered Britannia to sail as a trial horse for the America ’s Cup challenger Shamrock Captain Carter was again at the helm. He continued to sail big racers until his death in Rowhedge on 26th October 1910.

John Carter’s son Jack R. Carter, also born in Wivenhoe, became the skipper of the Britannia until after 1914.

The Prince of Wales valued John Carter’s skill as a helmsman and his ability in tuning and commanding a large racer and conferred on him membership of the Victorian Order for personal service.

First published in the Wivenhoe Encyclopedia