You are here: Home>Topics>Maps, Books, Deeds, Wills & more>Deeds of Wivenhoe Property>Abstract of Title to The Ship and Woodyard 1720 - 1825 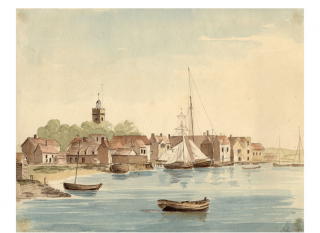 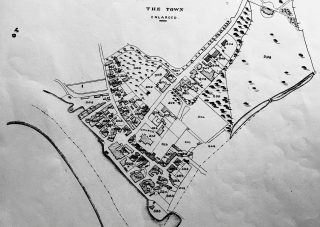 Extract from the 1838 Tithe Award Map showing (top left) what is believed to be the jetty where The Ship was originally sited. That particular parcel of land is also listed as No 354 Houses and Ship Yard (Three roods and thirteen perches).
Essex Record Office D/CT 406A

This Abstract is a little confusing until you realise that the first tenant referred to is Captain Daniel Harvey’s grandfather, John Harvey [1], who held two pieces of property in Wivenhoe. There was The Ship (presumably an inn) with stables and outbuildings and a piece of land where a house had been recently built called the Wood Yard. He surrendered this to his son John, Daniel’s father (1686-1777) [2] and his wife Deborah (the second tenants) on 28 March 1722 and twenty-five years later, on 9 June 1747, at the time of John Harvey’s [1] death he surrendered a second property to them described as tenements, wharf and a warehouse (part of which was used as a Warehouse for his Majesty’s Services). Ten years later, on 13 April 1757, John Harvey [2]  (Daniel’s father) surrendered this same property to his wife and Daniel Harvey, the only surviving son and heir, then acquired the above property by virtue of his father’s will of 8 July 1767.

Following Daniel’s death in 1794 the property was taken over by his Trustees and on 8 April 1795 surrendered to Daniel Blyth a merchant of Elmstead and on his death was transferred to his youngest son and heir George Blyth in April 1800. The property had been released and enfranchised by Nicholas Corsellis the Lord of the Manor earlier that year.

Unfortunately George Blyth drowned at sea in January 1816 but since he had not made a Will his eldest brother Daniel Oathwaite Blyth became his Heir at Law and on 31 March 1817 John and James Blyth inherited his effects.

Who being present in Court were accordingly admitted

Who being present in Court were accordingly admitted thereto

As to all foregoing premises in this Abstract

“I give devise and bequeath all and every my Messuages Lands ? and Hereditaments whatsoever and wheresoever with their and every of their rights Members and Appurtenances unto my well beloved son Captain Daniel Harvey and his heirs and assigns for ever”

At a General Court Baron held for this said Manor

Of all the forgoing premises (inter alia)

The Homage presented that on the 6th October then instant. The Sir James Eyre Samuel Ennew Stephen Martin Leake and Samuel Martin Did duly surrender

All the forgoing premises

To hold to said Daniel Blyth his Heirs and Assigns

Whereupon came into Court George Blyth (by his attorney) the Youngest Son and heir according to the Custom of the said Manor of the said Daniel Blyth and humbly desiring to be admitted to the said premises, as to his right and Inheritance

The Homage presented a Certain And Indenture bearing date the 20th January 1800 and made between the Rev. N. Corsellis Lord of the said Manor of the 1sf part Ann Oathwaite Blyth, William Blyth, John Bawtree of the 2nd part and the said Geo. Blyth of the 3rd part (Reciting as therein)

Did grant bargain Sell and release and confirm unto said Geo. Blyth and his heirs

All the Rev. Removed thereof and all his Estate Right Title Interest Freehold of Inheritance therein

Notes
It seems clear that this Abstract had been carefully checked for accuracy as a number of queries are written in the margins  regarding dates and documentary proof of joint tenancy, deaths or probate and concerns expressed that these should be available.

it should also be mentioned that Essex Record Office holds a document D/DEt T27/21 which is described as an ‘Abstract of Title to a Coalyard and premises in Wivenhoe’. The first entry dated 6 April 1763 refers to ‘A certain place called the Old Storehouse Woodyard and Key (sic) formerly in the occupation of Robert King which said premises were lately in the occupation of Captain John Harvey etc’. This sounds very much like at least part of the property referred to in D/DEt T27/20 which was sold off at that date and later became known as the Coal Yard. Daniel Blyth was also admitted to this property in November 1798.