Commander of a series of revenue cutters all called the Repulse. He also purchased the land which would later become known as part of the Wivenhoe House Estate and built a red brick mansion on the site. 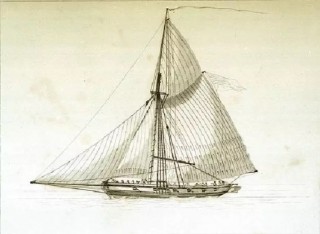 The Repulse, a cutter built for the Revenue Service, was stationed at Wivenhoe.

Daniel Harvey’s father was John Harvey (1686-1777), the son of John and Elizabeth Harvey, baptised at St Mary’s Church in Wivenhoe on 11 April 1686. A note in the Pedigree Register of September 1911, describes him as the Captain of the Custom House cutter Jean-Baptiste. He married Deborah Bail in Colchester at St Mary at the Walls on 23/25 January 1715, and his son, Daniel was baptised in Wivenhoe on 12 February 1722/3. He had an elder sister, Martha, baptised on 29 July 1717 and two brothers, both called John who did not survive to adulthood. There are few references to Daniel Harvey’s early life but local records show that his mother died of a fever and was buried at Wivenhoe on 21 March 1755.

Daniel’s grandfather, John Harvey, held property in Wivenhoe. There was The Ship (presumably an inn) with stables and outbuildings and a piece of land where a house had been recently built called the Wood Yard. He surrendered this to Daniel’s father and his wife Deborah on 28 March 1722 and twenty-five years later, on 9 June 1747, he surrendered further property to them described as tenements, wharf and a warehouse (part of which was used as a Warehouse for his Majesty’s Services). Ten years later, on 13 April 1757, John Harvey (Daniel’s father) surrendered this same property to his wife and Daniel Harvey, the only surviving son and heir, who acquired the above property by virtue of his father’s will of 8 July 1767.

Daniel Harvey followed in his father’s footsteps by working for the Customs Board which was another side of the prolific merchant trading coin in the 18th century. By 10 July 1756, he is recorded as being the commander of the Princess Mary, one of the largest custom vessels in the country, a ship of 80 tons and with a crew of 24, cited in the Registers of Declarations for Letters of Marque (against France). Letters of Marque were issued by the Admiralty and authorised privateers or private ships to capture merchant vessels without being prosecuted for piracy.

Later he took out a license to work as an independent privateer and from 1774 onward he commanded a series of six revenue cutters, all named Repulse, each one larger than the last, and acquired using the profits from his previous endeavours. Harvey’s share of the profits in one particularly successful period totalled in excess of £14,000 but he also had to pay for all damage sustained in action and not quit his allotted station in search of captures, something that he did not always comply with. A local writer suggests that the cutter ‘used the Colne as an anchorage but ranged far afield in pursuit of smugglers and pirates’. There is correspondence in the National Archives between Daniel Harvey and the Treasury with regard to the detention of an American schooner in Colchester in January 1776, and in May 1778, when the French and British were at war, Daniel Harvey lost the third Repulse, after chasing a smuggling cutter too close to the shore near Calais and he was deeply criticised by the relevant authorities for exceeding his remit. The ship had run aground and been captured, and his men imprisoned in a Calais gaol. For a time the cutter was used as a French privateer but was eventually recaptured by the British and returned to Captain Harvey.

Scouring the seas to capture smugglers was a lucrative, but also a dangerous business which not only involved the physical violence involved in seizing smuggling vessels, but also violence from local villagers who were often antagonistic to revenue men and frequently viciously attacked or assaulted them in the pursuance of their duty. Some idea of Daniel Harvey’s reputation is revealed by the uncovering, in October 1780, of a sensational plot mounted by French-commissioned smugglers and privateers with the object of capturing the fourth Repulse.

Although Daniel Harvey already owned property in Wivenhoe he had been accumulating position and financial resources from his chosen vocation as Commander of the Repulse. It may be that in his late forties, he decided to build a new mansion to the north-east of the busy quay which would reflect his increasing status. This decision was possibly influenced by his friendly relationships with the Rebows, the Martins and the Corsellis families, and he made it known that he was desirous of purchasing property from Nicholas Corsellis V (1745-1826) comprising a messuage and diverse cottages, land, tenements and hereditaments in the parish of Wivenhoe and Elmstead.

The transaction did not run smoothly because Nicholas Corsellis IV (1697-1761), the latter’s father, had entailed the property so that it could not be otherwise disposed of; it had also been used as security to raise mortgages. However following an Act of Parliament of 1771, Daniel Harvey was finally able to purchase the itemised parcels of land which were later to form part of the Wivenhoe House Estate and at some time in between 1772-1777 he built a fine red and white brick mansion with a coach house, stables and other outbuildings, reportedly elegantly fitted up and furnished in the present taste, sited just to the south of where Rebow Road now stands. He may have moved into his new mansion in the same year that he married Elizabeth Draper at Saint Bride Fleet on 23 December 1777, when he was fifty-five years old. On 22 July 1778 Mary Martin the younger (now Mrs Isaac Martin Rebow) writes that ‘Fan and I dined at Captain Harvey’s yesterday, there was (sic) the Corsellises, Mrs. Goodall, Frank Smythies and his wife, a Mrs. Bliss and a Mr Finch who has a tender at Wivenhoe and seems to be the true honest Jack Tar, for he calls the French every odd name and says he is certain they will never invade us…’.

By 1787 his affairs took a turn for the worse. It was revealed that he had been in continuous trouble for overspending and desertions amongst his crew, and finally the Customs Board carried out a number of investigations which revealed fraudulent behaviour by certain owners of its contracted revenue cutters.  Harvey was one of those accused of travelling light of mariners but claiming for a full complement, as well as presenting accounts for ‘unnecessary, excessive’ expenses not allowable within the terms of his contract. Following these investigations the number of cutters was reduced by the Board and in January 1788 Captain Harvey was removed from the command of the Repulse. Even before this there had been suggestions that Daniel Harvey had been incurring debts and in his will dated 25 March 1787, he requests that his property be sold to pay off his debts and legacies and that his funeral be ‘as frugal as decency will permit’.

He died on 21 February 1794, and shortly afterwards his surviving family left Wivenhoe. His wife, Elizabeth moved to Great Stanmore in Middlesex and their daughter Harriot’s (sic) marriage to William Parry is recorded on 3 March 1795. Their only son, George Daniel Harvey also married in Great Stanmore on 8 October 1803; he became a barrister and a Commissioner of the Court of Common Pleas – possibly with some assistance from that same Sir James Eyre (1734-1799), Chief Baron of the Exchequer in 1787, and later Chief Justice of the Common Pleas, who was one of the trustees of Daniel Harvey’s estate.

To read a copy of the full article ‘Wivenhoe House: A Tale of Two Lost 18th Century Mansions and the Sea-Captains who Built Them’ which was first published in ‘Transactions’, the journal of The Essex Society for Archaeology and History, Vol 1 (Fourth Series), 2010, pp 284-302, see the download below.