You are here: Home>Topics>Maritime>Mariners>Captain Matthew Martin (1676 - 1749) 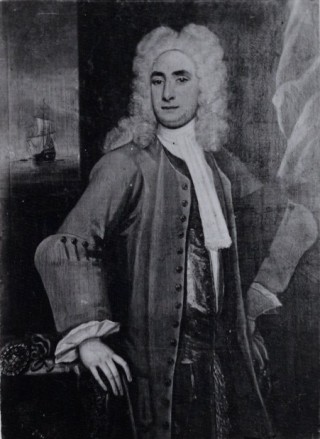 Matthew Martin was born in Wivenhoe and christened at St Mary’s Church on 17 May 1676. He was the second son of Samuel Martine (sic) (1640-1694) of Wivenhoe who was also a mariner. Eighteenth century writers such as Philip Morant intimated that he may have had connections with the Martin family of Saffron Walden and this suggestion was taken up by later historians who believed that he may have been a descendant of Richard Martin, the goldsmith who became Lord Mayor of London in the late 16th century; however no evidence has been found to date to confirm this.

In about 1702 he married Sarah Jones (1683-1738), the daughter of ‘An eminent East India Commander’ who lived in Stepney, Middlesex. In 1710 he inherited family property in Wivenhoe, following the death of both his mother and his brother Samuel in the same year. By now he was a captain in the East India Company’s service ‘wherein he acquitted himself with great success and reputation’. He commanded the 480-ton merchant ship the Marlborough, one of the company’s largest ships with 96 crew and thirty-two guns and made a number of voyages between Madras, Bengal, and on one occasion, China between 1711 and 1721. On 30 November 1711 the ship was commissioned to seize any pirates who might be seeking to illegally acquire lucrative cargoes from company ships and one year later, at some point between 6 October and 24 November 1712, when Britain and France were on opposing sides during the long war of the Spanish Succession, the Marlborough was attacked by three French ships. His successful escape from the French, was lauded by contemporary writers. Morant states that he defended the Marlborough for ‘three successive days against three French ships of war, and brought her safe to Fort St George; her cargo valued at £200,000, for which great service he had a reward of £1000 and a gold medal set around with 24 large diamonds’. This report is taken up again in ‘The British Critic’ of 1804 which, reciting the reasoning behind the granting of armorial honours ‘for naval and military triumphs’, uses the distinction awarded to Captain Martin as an example. Martin’s portrait was painted at this time and shows what must be the Marlborough in the background and by his right hand the gold medal studded with diamonds.

His status in the county must have been at a peak when the marriage between his seventeen year old daughter, Mary (1712-1776), and Isaac Lemyng Rebow (1705-1735) was arranged in 1729; a connection which would have mutual benefits for both families in terms of increasing their wealth, status and position in society. This connection was illustrated in the 1734 Hayward Rush map of Wivenhoe, which shows not only the ‘Park’ (now the site of the University of Essex), belonging to Isaac Lemying Rebow but also ‘the Seat of Captain Matthew Martin Esq, Late Member in Parliament for the ‘Antient Borough of Colchester who built the same and Resides here when spared from the East India Company of which he is Director’.

It seems that the 1720s and early 1730s were good times for Captain Martin. He appears to have been a popular figure and was described as being ‘much esteemed for his affability, integrity and generosity’. Like many country gentleman of the age he entered politics and stood as a Whig MP from 1722-7, becoming Mayor of Colchester in 1726. In 1727 a faculty for two pews’ in Wivenhoe Church, was granted to his family for the duration of their ownership of a mansion in the parish, and at some point he also donated a clock with a bell (now located in the Wivenhoe Museum) to the church.

He was aware of his duties to others and his name appears: in connection with the Wivenhoe workhouse, as a governor at St Thomas’s Hospital, London from 1732-44, and as a member of Trinity House. He also owned a substantial portfolio of property in Colchester, Westminster and Wapping.

Records from the mid-1730s onwards hint at a more problematic time for the Martin family. Mary’s marriage to Isaac Lemyng Rebow was of short duration as he died ‘of a Lethargy, being so very fat, as scarce able to breathe’ in February 1735. She was left to bring up her three year old son Isaac Martin Rebow (1731-81) until he was of an age when he could inherit ‘the Park’. On 13 March 1736 the Country Journal reported the case of Captain Matthew’s third surviving son George who, while serving as the Second Mate of the Middlesex an India-man, was accused of striking a sailor causing him to lose the sight of one eye. Although several witnesses swore that Mr Martin had behaved in a ‘courteous civil manner’, he was found guilty and obliged to pay £200 in damages. This unhappy event was followed by the death of Captain Martin’s wife, Sarah who died on 6th January, 1738. By this time Captain Martin had left the Wivenhoe mansion and taken up permanent residence at Alresford Hall, and Sarah was buried in the family vault now erected by Matthew Martin in the chancel at St Peter’s Church, Alresford.

Captain Martin died on 8 July 1749 and was buried as requested in the family vault at St Peter’s Church. He left two surviving daughters, Mary and Sarah and two sons, Thomas, who was pursuing a career as a barrister in Chelsea and Samuel, who had inherited the Wivenhoe mansion.

To read a copy of the full article ‘Wivenhoe House: A Tale of Two Lost 18th Century Mansions and the Sea-Captains who Built Them’ which was first published in ‘Transactions’, the journal of The Essex Society for Archaeology and History, Vol 1 (Fourth Series), 2010, pp 284-302, see the download below.