You are here: Home>Topics>Maritime>Mariners>RMS Titanic Disaster and the Venetia

RMS Titanic Disaster and the Venetia

Captain and crew of the Venetia collecting money for this disaster 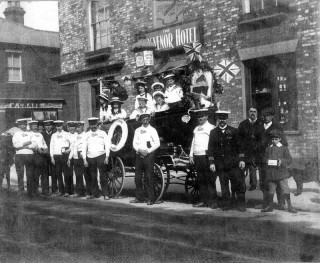 This photograph shows the Captain and crew of the steam yacht Venetia, collecting for the Titanic disaster in 1912 outside the Grosvenor Hotel in Maldon Road, Colchester.

Mr A.K. Barlow and other prominent Wivenhoe gentlemen formed a committee to raise money for the victims of the sinking and their dependents.  Bearing in mind that the crew members’ families would have been left without a breadwinner in the days before Social Security, there would have been a dire need for some sort of relief.  The minute book of the committee which was set up to run the fund is now in the possession of the Nottage Maritime Institute.

In 1915, the Venetia was requisitioned for the First World War, and most of her crew, some of whom were Wivenhoe men. volunteered to go with her.