About the sailing barge Wyvenhoe 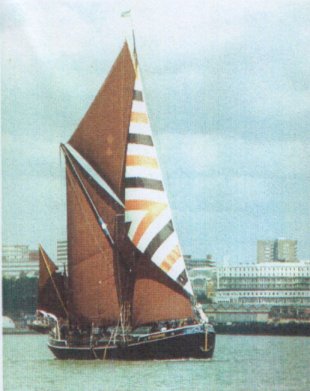 The Thames Sailing Barge Wyvenhoe built at Wivenhoe in 1898 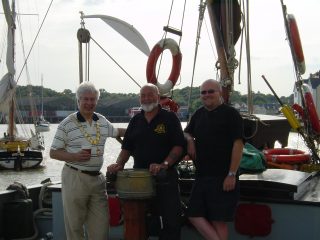 Peter Hill, Town Mayor, with Martin Phillips (right) and his First Mate at the Wivenhoe Regatta in 2004
Photo Jan Ward 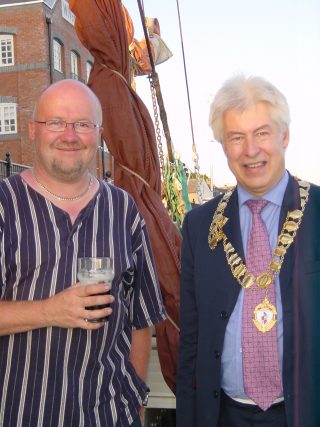 The Wyvenhoe in her de-rigged state after 1923

She was built of iron in 1898, by Forrest & Sons at Wivenhoe in Essex. Like most Thames sailing barges, she was rigged with a spritsail rig which enabled a small crew of two or three men to handle her. She originally carried all sorts of cargo around the coast of Britain and to Europe. it is known that ‘Wyvenhoe’ often carried linseed, although many barges carried cement, sand, bricks, stone, hay and straw.

She was converted to a motor ship in 1923, and after being rebuilt in steel in 1947, she traded until 1982. She holds the record of having traded longer than any other British registered ship.

They are traditionally referred to as a Thames Barge and have evolved over a long period of carrying bulk cargoes between coastal areas in England and to ports in the nearer continental countries. The easily handled sail plan, flat bottom, shallow draught and considerable cargo capacity for a small ship, was the basis of a considerable trade in bulk cargoes where speed was not essential. There is no keel, stability being provided by ‘lee boards’, one on each side, which can be raised or lowered as necessary. Similar vessels evolved from the same needs in near Europe, particularly in Holland and ‘Dutch Barge’ is heard as often as ‘Thames Barge’. The remaining barges, all 30, have been converted for pleasure use and there are probably no more hulks lying in East Coast creeks that can be rebuilt.

‘Wyvenhoe’ has given great pleasure to many people over recent years where she has been used extensively for charter work and functions of many kinds, including weddings and similar celebrations, meetings, training sessions, press presentations, product launches, seminars, art classes, film and still photography, staff rewards and customer entertainment.

She used to be berthed in the heart of London at St Katherine’s Dock by Tower Bridge, but these days operates out of a base in Maldon.

In 1998 ‘Wyvenhoe’, with three others, sailed around Lands End and took part in the Bristol International Festival of the Sea. She was used as accommodation for commercial organisations involved in the Festival. In 1999, ‘Wyvenhoe’ was honoured to be chosen to go to Windsor, with masts lowered (and the river too in some places) to get under the bridges, to be the venue for the 100th anniversary of the Sea Cadets. A brass plate on one of the saloon chairs commemorates the visit of H.M.The Queen to the exhibition staged on board.

The other notable event in 1999 was truly explosive. ‘Wyvenhoe’ starred in the James Bond film The World is Not Enough’. The masts were taken down, the deck was covered with a steel sheet lid, false masts and a deckhouse were constructed and then the whole upper part was blown-up with great force on the Thames. It looked like the end for ‘Wyvenhoe’, but when the protection was removed, she was as good as old underneath.

In 2004 she came to Wivenhoe to take part in the Regatta.

In 2011 Wyvenhoe was featured in an edition of the BBC programme Countryfile when she took part in an impromptu ‘race’ with another barge in the River Medway and presenter Matt Baker interviewed Wyvenhoe’s Skipper Martin Phillips.

To contact the owners of the Wyvenhoe and think about booking a trip on her, click here

Note: This page was first published on the Wivenhoe Encyclopedia