You are here: Home>Topics>Maritime>Sailing Boats>About the Smack Yacht "Vera" built in Wivenhoe in 1893

About the Smack Yacht "Vera" built in Wivenhoe in 1893

Built by Forrest & Sons of Wivenhoe. Researched by the late Bill Ellis 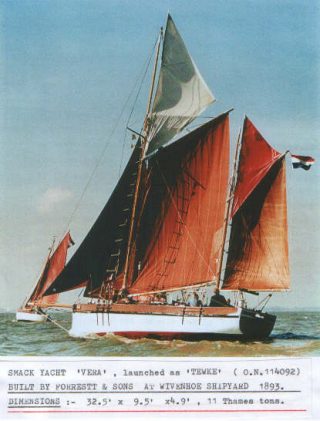 In 1893, the Smack Yacht “VERA”, launched as ‘Tewke’, was built by Forrest & Sons in the shipyard next to Wivenhoe railway station.

At the end of the 19th and start of the 20th centuries, the vessel was owned by Arthur Briscoe, the renowned etcher and marine artist of West Mersea. Since that time she has had a number of owners in the UK but is now owned by Mr Henk Duister, a former conservator at the Zuiderzee Museum, Enkhuizen, in Holland.

The beautifully preserved and maintained yacht is now sailed from Broekerhaven on the Marker Meer by ‘skipper’ Duister, his ‘mate’ wife Willi and a family crew.

Originally rigged as a cutter, “VERA” was converted to ketch rig in 1990.

In the hands of the Duister family, “VERA” has won many awards in sailing races and has now been honoured by the Dutch organisation Monumentemzorg which cares for old historic buildings, ships and other artefacts.

At the ripe old age of 110 years, this Essex lady has been designated a Sailing Monument.

Note: This write up is taken from the website called the Wivenhoe Encyclopedia where it was published in 2003