She won many races for the Marquis of Anglesey 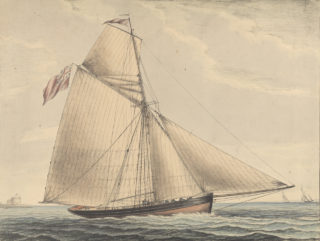 The yacht Pearl, which was built at Colchester Hythe in 1820 for Henry William Paget, the Marquis of Anglesey, who as the Earl of Uxbridge had a leg shot off as the commander of the British cavalry at Waterloo.

Presumably finding peacetime life boring after a very active Army career, he decided to take up yacht racing.  With the seas now free of enemy privateers and press gangs, this was becoming a fashionable rich man’s pastime.  Not a man who liked losing, and having plenty of money, the Marquis of Anglesey wanted the very best, fastest yacht that had ever been built. He soon learned that the man to build such a yacht was the Colneside shipbuilder Philip John Sainty, and was determined to get him.  Sainty was a builder of fast boats: fruit schooners and fishing smacks that needed to get their perishable cargoes to market in peak condition, and fast Revenue cutters able to chase and catch the smugglers who were depriving the Government of much-needed customs revenue.  As a sideline he also built fast boats for the smugglers that that clientele hoped would be able to evade those vessels of his more official customers.

At the time when Henry Paget decided to buy his new yacht, Sainty was in Chelmsford gaol, for smuggling.  Paget was determined to get him out to build his super-yacht.  The wily Philip Sainty said that he could build the boat, but would need the help of his brother and a cousin, who knew his trade secrets, but were unhappily also in prison for smuggling.  The Marquis got all three of them out of prison, possibly with a bit of influence, but more probably by paying some hefty fines.

The yacht, named Pearl, was completed in June 1820, and seems to have been all that her proud owner hoped she would be.  She won races and set the standard for racing yachts for decades.  She measured 113 ton by the old method of measurement, and was 68 feet in length.  Her owner moved her from London to Southampton, then the centre of the yachting world, and never did sell her.  He died at the end of 1854, and the Pearl was not sold until 1856.

In 1873 the Pearl was later sold to Benjamin Nicholson (yacht builder) of Gosport, registered Portsmouth, and altered from a cutter to a yawl.   Nicholson was a founding partner in the famous yacht building firm of Camper & Nicholson of Gosport.  Later in 1873 she was resold to George Bishop of Twickenham.  This owner died in 1883, and executor, James Bishop of Newbury, sold her in 1884 to Warrington Baden-Powell of London, Portsmouth.

Her end finally came in 1902 when the Register was closed  with the explanation, “Broken up.”