You are here: Home>Topics>Maritime>Steam Yachts>About the SY Venetia on the Great Lakes in Canada

About the SY Venetia on the Great Lakes in Canada

She was fitted out at Forrestts of Wivenhoe in 1903 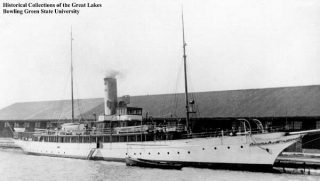 Picture of the SY Venetia taken in Toronto in the 30s or 40s.
Belongs to the archives of Bowling Green State University. 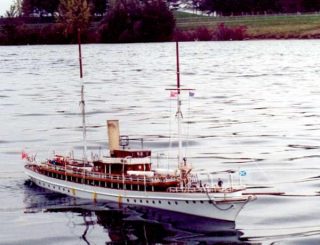 Paul Gockel in Canada is researching the Venetia, a steam yacht built in Leith (at Hawthorn’s yards) and subsequently fitted out at Wivenhoe. She ended up on on the Great Lakes in Canada.

According to Paul’s researches, and with help from Nick Butler’s book on Wivenhoe and other sources, she was designed by a native Wivenhovian, J.E.Wilkins and outfitted at Forrestt’s in Wivenhoe in 1903.

He hopes to be publishing a book about the vessel and her owner very soon. The manuscript presently runs to 255 pages.

Paul is an organist who made contact with Graham Wadley, organist here in Wivenhoe at St Mary’s, having found Graham’s e-mail address in the Wivenhoe Encyclopedia. This has resulted in them exchanging e-mails about organ music as well as Graham helping Paul with research on the Venetia.

Graham has got Lis Baines and Bill Ellis involved, both of whom have spent a considerable amount of time to provide information about the shipyard, drawing particularly on records stored in the Nottage Institute.

The picture shown on this page is of the SYVenetia taken in Toronto in the 30s or 40s. It belongs to the Bowling Green State University archives.

Note: This page is copied from the Wivenhoe Encyclopedia where it was first published in 2006.

For more about the SY Venetia, also see:  click here  and here about the crew of the Venetia who helped raise money after the Titanic disaster